Steven John Carell is an American actor and comedian. He played Michael Scott in The Office , NBC’s adaptation of the British series created by Stephen Merchant and Ricky Gervais, where Carell also worked as an occasional producer, writer and director. Carell has received numerous accolades for his performances in both film and television, including the Golden Globe Award for Best Actor – Television Series Musical or Comedy for his work on The Office. He was recognized as "America's Funniest Man" by Life magazine.Carell gained recognition as a correspondent on The Daily Show with Jon Stewart from 1999 to 2005. He went on to star in several comedy films, including Anchorman: The Legend of Ron Burgundy and its 2013 sequel, as well as The 40-Year-Old Virgin , Evan Almighty , Get Smart , Date Night , Crazy, Stupid, Love , and The Way, Way Back . He also voice acted in Over the Hedge , Horton Hears a Who! and the Despicable Me franchise .

Effectively using his distinctive surreal deadpan humor to make memorable comedic performances, Steve Carell has established himself as one of major comedic actors in Hollywood. His debut film was ˜Curly Sue' and then he managed to appear on TV and movies such as ˜The Dana Carvey Show', ˜Over the Top' and ˜Suits' and became one of the correspondents in Comedy Central's ˜The Daily Show' by the turn of the 21st century. It gave him ample opportunity to hone his comedic skills and more significantly provided him enough buzz to be able to make it big on the silver screen. The hilarious flick ˜Bruce Almighty' was a huge success and brought him widespread recognition and more favorable offers. He went on to act in box-office hits such as ˜Anchorman', ˜The 40 Year-Old Virgin', ˜Little Miss Sunshine', ˜Evan Almighty', and ˜Get Smart' and ˜High T'. Throughout this time, he maintained a successful career in television and starred as Michael Scott in the existential comedy ˜The Office'. He left the series to concentrate on his film career and appeared in such films as ˜Date Night', ˜Despicable Me', ˜Crazy', ˜Stupid', ˜Love', and ˜Seeking a Friend for the End of the World'.

He married Nancy Walls in 1995 and they have two children, Annie and Johnny.

He grew up with three older brothers and worked as a mail carrier before joining a children's theater company. He then began performing with The Second City, where he met his future Daily Show cast-mate Stephen Colbert.

He provided his voice for Gru in the Despicable Me films and for the mayor in the 2008 Disney feature Horton Hears a Who! His portrayal of John du Pont in the 2014 drama Foxcatcher earned him an Academy Award nomination for Best Actor.

Steve Carell's estimated Net Worth, Salary, Income, Cars, Lifestyles & many more details have been updated below. Let's check, How Rich is He in 2021-2022? According to Forbes, Wikipedia, IMDB, and other reputable online sources, Steve Carell has an estimated net worth of $80 Million at the age of 59 years old in year 2022. He has earned most of his wealth from his thriving career as a Comedian, Film Producer, Actor, Television producer, Voice Actor, Screenwriter, Television Director from United States. It is possible that He makes money from other undiscovered sources

He appeared in the 2010 action comedy film Date Night with Tina Fey.

Steve Carell's house and car and luxury brand in 2021 is being updated as soon as possible by in4fp.com, You can also click edit to let us know about this information.

Steve Carell Never Rewatches Himself In "The Office"

The Late Show with Stephen Colbert - 2 years ago 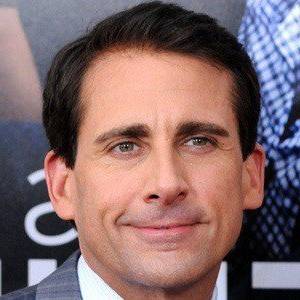