Sophia Grace Brownlee is a British actress, singer and TV personality who became famous overnight when a YouTube video of her singing a cover version of Nicki Minaj's song "Super Bass" went viral. In the video, an eight-years-old Sophia can be seen singing while her cousin, five-years-old Rosie Grace McClelland, dances beside her. Within a month of publishing the video on YouTube, the two girls appeared on ˜The Ellen Show' and soon became a regular guest of the show. Sophia has since then released three singles along with music videos. The first single was "Girls Just Gotta Have Fun" which also featured her cousin Rosie. Her second single, "Best Friends", made it to the "Billboard Hot 100" list. In June 2016, she released her third single "Girl In The Mirror" featuring SilentÃ³. She has signed a deal with Capitol Records France and will be releasing a full album in 2016 itself. The illustrated children's book that she co-wrote with her cousin, ˜Tea Time with Sophia Grace & Rosie', gained No. 2 spot on The New York Times Best Seller list of "Children's Picture Books". She is also a successful YouTuber with almost 2 million subscribers.

She was born to Dominic and Carly Brownlee. She has a younger sister named Belle.

She is known for performing in her signature pink skirt and silver tiara.

She has performed with her cousin on The Ellen DeGeneres Show on multiple occasions.

Sophia Grace Brownlee's house and car and luxury brand in 2021 is being updated as soon as possible by in4fp.com, You can also click edit to let us know about this information. 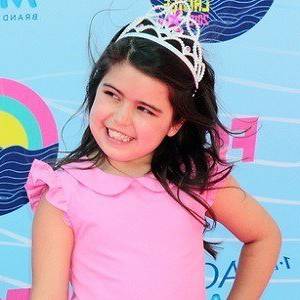