Sarah Catherine Paulson is an American actress known for her work in several TV series, such as 'American Gothic' and 'Jack & Jill'. Her amazing performance in 'The People v. O. J. Simpson: American Crime Story', where she played a public prosecutor, earned her several awards including an Emmy. Born in Tampa, Florida, she began her acting career as a teenager right after she passed out of high school. She came to popularity during the 1990s through her appearance in TV series such as 'Law & Order' and 'American Gothic'. Some of the most successful works in her TV career were her performances in popular shows like 'American Horror Story', 'Strip' and 'Game Change'. Paulson has also appeared in a few films. She played a supporting role in the popular drama film '12 Years a Slave'. The film was a huge hit and won three Oscars. She also played a significant role in the romantic drama 'Carol' which was also a huge success and received six Oscar nominations.

She was in a relationship with actress Cherry Jones from 2005 until 2009. She then began dating actress Holland Taylor in 2015.

She attended the American Academy of Dramatic Arts.

She was nominated for a 2007 Golden Globe Award for her role on the series Studio 60 on the Sunset Strip. In 2016, she won an Emmy Award for her portrayal of Marcia Clark on the FX series The People v. O. J. Simpson: American Crime Story.

Information about Her net worth in 2021 is being updated as soon as possible by infofamouspeople.com, You can also click edit to tell us what the Net Worth of the Sarah Paulson is

She co-starred with Julianne Moore in the 2012 HBO political drama film Game Change.

Sarah Paulson's house and car and luxury brand in 2021 is being updated as soon as possible by in4fp.com, You can also click edit to let us know about this information. 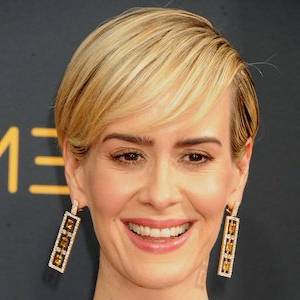