Born on December 7, 1988 (age 33) in Danville, California, United States. He is a celebrity football player. His nationality is American. His spouse is Danielle Mancuso (m. 2012). He was a Running back in number 29 in Washington Redskins . He height is 5′ 11″.

Running back who debuted in the NFL in 2011 with the Washington Redskins.

He was born to Kilistofa and Roy Helu, Sr.

He attended Nebraska before being drafted by the Redskins in the fourth round of the 2011 NFL Draft.

He set the Redskins' franchise record for most receptions in a single game with 14 on November 6, 2011.

Information about His net worth in 2021 is being updated as soon as possible by infofamouspeople.com, You can also click edit to tell us what the Net Worth of the Roy Helu is

He began sharing a backfield in Washington with Alfred Morris in 2012, when the team signed the undrafted free agent out of Florida Atlantic.

Roy Helu's house and car and luxury brand in 2021 is being updated as soon as possible by in4fp.com, You can also click edit to let us know about this information. 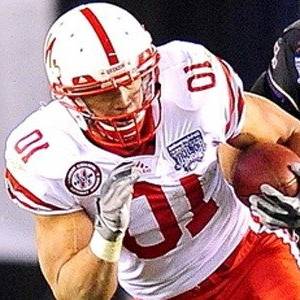