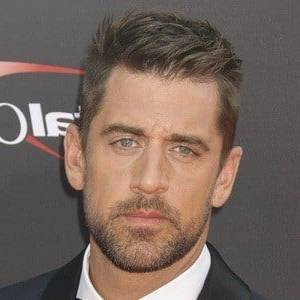 Aaron Charles Rodgers is an American football quarterback for the Green Bay Packers of the National Football League . Rodgers began his college football career at Butte College in 2002 before transferring to the University of California, Berkeley to play for the California Golden Bears, where he set several career passing records, including lowest single-season and career interception rates. He was selected in the first round of the 2005 NFL Draft by the Packers.After backing up Brett Favre for the first three years of his NFL career, Rodgers became the Packers' starting quarterback in 2008. In 2010, he led them to a victory in Super Bowl XLV over the Pittsburgh Steelers, earning the Super Bowl MVP. He was named Associated Press Athlete of the Year in 2011, and was voted league MVP by the Associated Press for the 2011, 2014, 2020 and 2021 NFL seasons. Rodgers is the fifth player to win NFL MVP in consecutive seasons, joining Peyton Manning, Brett Favre, Joe Montana and Jim Brown.

Aaron Rodgers is an American footballer who currently plays for the Green Bay Packers of the National Football League. He rose to prominence after leading his club to a Super Bowl victory in 2011. Aaron, who was born in Chico, California, has been a football fan since he was a child. He could quietly sit through and enjoy a whole NFL game from the age of two, which is a remarkable ability for a child! As a young child, he was also interested in other sports such as baseball and basketball. Despite the fact that he was anticipated to be selected by the San Francisco 49ers in the 2005 NFL draft, he was passed over in favor of Alex Smith. Instead, the Green Bay Packers selected Rodgers. He has shown his value throughout his career with his incredible abilities and achievements. He holds the NFL records for "best touchdown to interception ratio" and "most consecutive games without multiple picks." Rodgers is also well-known for his charitable endeavors. He was able to generate $50,000 for the MACC fund, which supports cancer research.

When he was ten years old, he won a free-throw tournament and was featured on the front page of his local newspaper. He attended Butte Community College for a year before moving to UC Berkeley, where as a junior, he led the team to a 10-win season.

In 2011, he set the NFL single season record for best quarterback rating by posting a 122.5 across the year. He also set the NFL record for most consecutive seasons with a passer rating over 100, achieving the feat five straight years from 2009 to 2013.

Aaron Rodgers's estimated Net Worth, Salary, Income, Cars, Lifestyles & many more details have been updated below. Let's check, How Rich is He in 2021-2022? According to Forbes, Wikipedia, IMDB, and other reputable online sources, Aaron Rodgers has an estimated net worth of $200 Million at the age of 38 years old in year 2022. He has earned most of his wealth from his thriving career as a American football player, Athlete from United States. It is possible that He makes money from other undiscovered sources Reliable sources show that his annual salary is about $50 Million

He succeeded the legendary Brett Favre as quarterback of the Packers.

Aaron Rodgers's house and car and luxury brand in 2021 is being updated as soon as possible by in4fp.com, You can also click edit to let us know about this information.