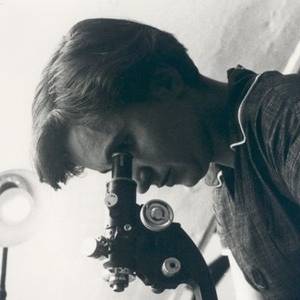 Rosalind Elsie Franklin was an English chemist and X-ray crystallographer whose work was central to the understanding of the molecular structures of DNA , RNA , viruses, coal, and graphite. Although her works on coal and viruses were appreciated in her lifetime, her contributions to the discovery of the structure of DNA were largely unrecognized during her life, for which she has been variously referred to as the "wronged heroine", the "dark lady of DNA", the "forgotten heroine", a "feminist icon", and the "Sylvia Plath of molecular biology".She graduated in 1941 with a degree in natural sciences from Newnham College, Cambridge, and then enrolled for a PhD in physical chemistry under Ronald George Wreyford Norrish, the 1920 Chair of Physical Chemistry at the University of Cambridge. Disappointed by Norrish's lack of enthusiasm, she took up a research position under the British Coal Utilisation Research Association in 1942. The research on coal helped her earn a PhD from Cambridge in 1945. Moving to Paris in 1947 as a chercheur under Jacques Mering at the Laboratoire Central des Services Chimiques de l'État, she became an accomplished X-ray crystallographer. After joining King's College London in 1951 as a research associate, she discovered the key properties of DNA, which eventually facilitated the correct description of the double helix structure of DNA. Owing to disagreement with her director, John Randall, and her colleague Maurice Wilkins, she was compelled to move to Birkbeck College in 1953.

Rosalind Franklin was a renowned chemist from England who did pioneering work in the field of X-ray crystallography. Born to rich family, she pursued her education from premier institutions and was a bright student. Achieving stellar grades in the matriculation examination she received a scholarship but her father asked her to give the scholarship to deserving refugee student. It was when she enrolled at Cambridge that her scientific career truly began. She did an extensive study on coals and classified them into different category on the basis of their efficiency as a fuel. During one such study she was introduced to the technique of x-ray crystallography and Rosalind was intrigued by its scope thus deciding on pursuing a career in this field. She used x-ray imagery of coal to understand the changes occurring at molecular level in carbon when amorphous coal changes to solid graphite. Next she embarked on her most important discovery, the structure of DNA molecule. Working with Maurice Wilkins and a doctorate student Raymond Gosling, she was able to correctly assess the structure of DNA. Her theory that DNA consists of two helical structures was later confirmed by scientists James Watson and Francis Crick. She also played an important role in deciphering the RNA structure. Read on to know more about her life and works.

She grew up in London's Notting Hill neighborhood as the daughter of wealthy Jewish parents. Sadly, she died of ovarian cancer in her late thirties.

After completing her chemistry education at Newnham College, Cambridge, she conducted research at the Dolan DNA Learning Center in New York and went on to work for the British Coal Utilisation Research Association.

While working as a researcher at King's College London, she became the first scientist to use the X-ray diffraction technique to study DNA.

Her work paved the way for Francis Crick and James Watson's discovery of the double helix structure of DNA.