Before making his NHL debut with the Ottawa Senators in 2011, he won the Jack A. Butterfield Trophy as the AHL's MVP with the Binghamton Senators. In 2015, he was sent to the Buffalo Sabres.

He married a woman named Donya. His parents are Michael and Veronica Lehner.

He started off playing soccer and then turned to hockey at the age of ten. In 2007, he made his debut with Frolunda in his home Sweden.

In international hockey, he has represented Sweden at tournaments like the 2009 IHFF World Under-20 Championship, where he brought home silver. The design of his mask is influenced by the Swedish death metal band In Flames, of whom he is a huge fan.

Information about His net worth in 2021 is being updated as soon as possible by infofamouspeople.com, You can also click edit to tell us what the Net Worth of the Robin Lehner is

He has been teammates with Canadian centre Kyle Turris in Ottawa.

Robin Lehner's house and car and luxury brand in 2021 is being updated as soon as possible by in4fp.com, You can also click edit to let us know about this information. 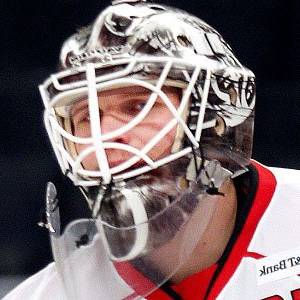