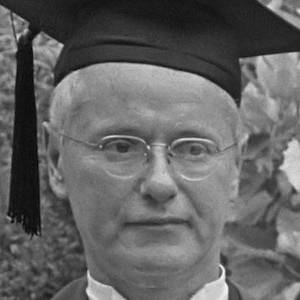 Robert King Merton (born Meyer Robert Schkolnick; July 4, 1910 – February 23, 2003) was an American sociologist who is considered a founding father of modern sociology, and a major contributor to the subfield of criminology. He served as the 47th President of the American Sociological Association. He spent most of his career teaching at Columbia University, where he attained the rank of University Professor. In 1994 he was awarded the National Medal of Science for his contributions to the field and for having founded the sociology of science.Merton’s contribution to sociology falls into three areas: (1) sociology of science; (2) sociology of crime and deviance; (3) sociological theory. He developed notable concepts, such as "unintended consequences", the "reference group", and "role strain", but is perhaps best known for the terms "role model" and "self-fulfilling prophecy". The concept of self-fulfilling prophecy, which is a central element in modern sociological, political, and economic theory, is one type of process through which a belief or expectation affects the outcome of a situation or the way a person or group will behave. More specifically, as Merton defined, "the self-fulfilling prophecy is, in the beginning, a false definition of the situation evoking a new behavior, which makes the originally false conception come true".Merton's concept of the "role model" first appeared in a study on the socialization of medical students at Columbia University. The term grew from his theory of the reference group, the group to which individuals compare themselves but to which they do not necessarily belong. Social roles were central to Merton's theory of social groups. Merton emphasized that, rather than a person assuming just one role and one status, they have a status set in the social structure that has, attached to it, a whole set of expected behaviors.

Unintended consequences and the self-fulfilling prophecy were coined by a Columbia University sociologist. He devoted the most of his career studying and creating theories about social roles, coining the term "status set" to define a person's collection of social statuses.

He grew up in Philadelphia, Pennsylvania, into a working class immigrant family from Easter Europe.

One of his studies was on scientific sociology, which concentrated on Purtian society and its link with science.

Looking into the social structure of the U.S., he found that when group don't have the opportunity to achieve the 'American dream,' the result can be criminal behavior.

● Robert K. Merton was born on July 4, 1910 (age 93) in Pennsylvania, United States ● He is a celebrity sociologist ● His full name is Meyer Robert Schkolnick● His popular books are Social Theory and Social Str... (1949), The sociology of science (1973), Social Structure and Ano... (1938), On social structure and scien... (1996) and The travels and adventur ● In His career, Robert K. Merton has achieved an National Medal of Science for Behavioral and Social Science● He attended Harvard University (1936), South Philadelphia High School, Temple University● He died on February 23, 2003, New York City, NY

Top 10 Scientists, sociologists of the year 2021 by vote