Prince Rogers Nelson was an American singer-songwriter and multi-instrumentalist. Widely regarded as one of the greatest musicians of his generation, he was known for his flamboyant, androgynous persona and wide vocal range, which included a far-reaching falsetto and high-pitched screams. Prince produced his albums himself, pioneering the Minneapolis sound. His music incorporated a wide variety of styles, including funk, R&B, rock, new wave, soul, synth-pop, pop, jazz, and hip hop. He often played most or all instruments on his recordings.Born and raised in Minneapolis, Minnesota, Prince signed a record deal with Warner Bros. Records at age nineteen, releasing the albums For You and Prince . He went on to achieve critical success with the innovative albums Dirty Mind , Controversy and 1999 . His sixth album, Purple Rain , was recorded with his backup band the Revolution, and was the soundtrack to his film acting debut of the same name. Purple Rain continued critical success for Prince and was a major commercial success, spending six consecutive months atop the Billboard 200. Prince won the Academy Award for Best Original Song Score. After disbanding the Revolution, Prince released Sign o' the Times , widely hailed by critics as his magnum opus. In the midst of a contractual dispute with Warner Bros. in 1993, he changed his stage name to the unpronounceable symbol , and was often referred to as the Artist Formerly Known as Prince and simply the Artist.The Artist signed with Arista Records in 1998 and began referring to himself by Prince again in 2000. He achieved six US top ten albums over the following decade. In April 2016, aged 57, Prince died of an accidental fentanyl overdose at his Paisley Park home and recording studio in Chanhassen, Minnesota. Prince had a prolific output, releasing 39 albums during his life, with a vast array of unreleased projects left in a vault at his home after his death, including completed albums and over 50 music videos. He released songs under multiple pseudonyms during his life, as well as writing songs that were made popular by other musicians, such as "Nothing Compares 2 U" and "Manic Monday". Estimates of the complete number of songs written by Prince range anywhere from 500 to well over 1,000. Released posthumously, his demo albums Piano and a Microphone 1983 and Originals both received critical acclaim.

This popular recording artist, born Prince Rogers Nelson, has ten platinum-selling albums to his credit and received many Grammy Awards for Purple Rain, including Best Performance and Best Soundtrack.

He was born with epilepsy and began writing music at the age of seven. 94 East was one of the first bands he worked with.

He became known for releasing over thirty Top Forty single hits and gained fame as an international sex symbol.

In 2005, he played guitar on the Stevie Wonder single "So What the Fuss." 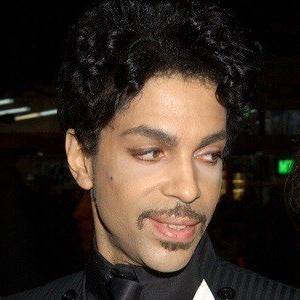