Patricia Lee Smith (born December 30, 1946) is an American singer-songwriter, musician, author, and poet who became an influential component of the New York City punk rock movement with her 1975 debut album Horses.Called the "punk poet laureate", Smith fused rock and poetry in her work. Her most widely known song is "Because the Night", which was co-written with Bruce Springsteen. It reached number 13 on the Billboard Hot 100 chart in 1978 and number five in the U.K. In 2005, Smith was named a Commander of the Ordre des Arts et des Lettres by the French Ministry of Culture. In 2007, she was inducted into the Rock and Roll Hall of Fame.On November 17, 2010, Smith won the National Book Award for her memoir Just Kids. The book fulfilled a promise she had made to her former long-time partner, Robert Mapplethorpe. She placed 47th in Rolling Stone magazine's list of 100 Greatest Artists published in December 2010 and was also a recipient of the 2011 Polar Music Prize.

If you think rock and roll is just about music and not verses, or poetry is only about verses and not music, you're in for a surprise, for the Godmother of Punk has redefined poetry and rock and roll and expressly specified their interconnection. Only a few people will be surprised if they haven't heard of Patti Smith, while the majority will know exactly what we're talking about! Patti Smith is a pioneer of punk rock music who transformed the perception of female rock musicians around the world. She was a trailblazer in her own right, making the poetic meanings seem sweeter than the sounds of the guitar in the realm of rock and roll with her soulful yet powerful lyrical talent. She revolutionized the mental processes and dreams of a whole generation with her immaculate style and powerful gifted attitude. She rose to prominence as a singer-songwriter and musician after the release of her debut album, Horses, in 1975. Because the Night, her hit, gained her international success and renown. She has made significant contributions to rock music over the years, for which she has received numerous awards. Continue reading to learn more about her life and career.

She married Fred Sonic Smith on March 1, 1980 and they had a son named Jackson and a daughter named Jesse together before Fred's death in 1994.

She was introduced to singers such as Harry Belafonte and Bob Dylan when she was a child, and as a teenager, she renounced her Jehovah's Witness faith.

She was the recipient of the 2010 National Book Award for Just Kids, her memoir.

Patti Smith's estimated Net Worth, Salary, Income, Cars, Lifestyles & many more details have been updated below. Let's check, How Rich is She in 2021-2022? According to Forbes, Wikipedia, IMDB, and other reputable online sources, Patti Smith has an estimated net worth of $4 Million at the age of 75 years old in year 2022. She has earned most of her wealth from her thriving career as a Writer, Singer-songwriter, Poet, Musician, Actor, Voice Actor, Photographer, Painter from United States. It is possible that She makes money from other undiscovered sources

Smith and Allen Ginsberg were close friends; they met when Ginsberg mistook her for an attractive young man and he bought her lunch.

Patti Smith's house and car and luxury brand in 2021 is being updated as soon as possible by in4fp.com, You can also click edit to let us know about this information. 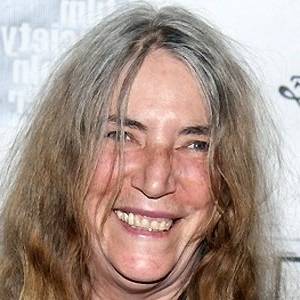