In 2016, he was named the Sammy Baugh Trophy winner as the quarterback of the Texas Tech Red Raiders. The Kansas City Chiefs selected him 10th overall in the 2017 NFL Draft.

His father Pat Mahomes played in the MLB from 1992 to 2003. He got engaged to Brittany Matthews in late 2020, and on February 20th 2021, their daughter was born. They named her Sterling Skye Mahomes.

At Whitehouse High School, he participated in football, basketball, and baseball. In his senior year, he threw a 16-strikeout no-hitter. He was named the 2013-2014 Maxpreps Male Athlete of the Year. He was picked in the 37th round of the 2014 MLB Draft by the Detroit Tigers, however he did not sign.

He set the NCAA record for single-game yards of total offense with 819 in 2016, and tied a single-game passing yardage record that same game with 734.

He was coached by Kliff Kingsbury as a member of the Texas Tech Red Raiders.

Patrick Mahomes II's house and car and luxury brand in 2021 is being updated as soon as possible by in4fp.com, You can also click edit to let us know about this information. 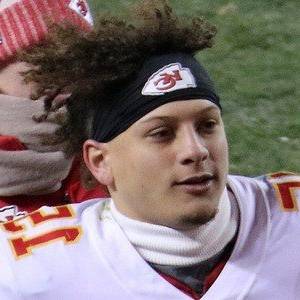