Leonard Simon Nimoy was an American actor who achieved international fame for playing Spock in the Star Trek franchise for almost 50 years; from two pilot episodes in 1964 and 1965 to his final film performance in 2013. Originating the role of Spock on Star Trek, he went on to play him again on the animated Star Trek series, the first six Star Trek films, and Star Trek: The Next Generation. Nimoy also directed films, including Star Trek III: The Search for Spock and Star Trek IV: The Voyage Home , and appeared in several films, television shows, and voice acted in several video games.Nimoy began his acting career in his early twenties, teaching acting classes in Hollywood and making minor film and television appearances through the 1950s. From 1953 to 1955, Nimoy served in the United States Army as a Staff Sergeant in the Special Services, an entertainment branch of the American military. In February 1965, he made his first appearance as Spock in the Star Trek television pilots "The Cage" and "Where No Man Has Gone Before", and went on to play the character until the end of the production run in early 1969, followed by eight feature films and guest appearances in later spin-offs in the franchise. From 1967 to 1970, Nimoy had a music career with Dot Records, with his first and second albums being mostly recorded in character of Spock. After the original Star Trek series, Nimoy starred in Mission: Impossible for two seasons, hosted the documentary series In Search of..., and made several well-received stage appearances.

Leonard Simon Nimoy was an actor, photographer, author, and film director from the United States. He began his acting career in his early twenties and battled for nearly a decade with low-budget and B-grade films. He only became one of the 50 greatest TV characters after his portrayal as Mr. Smock in the huge hit Star Trek. Spock, the half-human, half-Vulcan character, was the center of attention from the first episode to the final in 2013. Mission: Impossible, a role in the television film A Woman Called Golda, and the television show Fringe; host of the series 'In Search Of...' are some of his other well-known works. He expanded into direction after receiving a number of prizes for his outstanding performance as Mr. Smock. His other credits include his work as a theatrical actor, voice actor, song writer, and vocalist. Audiences praised his hosting of 'Standby: Lights, Camera, Action,' a children's instructional show, as well as his narration on radio series and animated feature films. In 1991, he was honored for his production talents in the film "Never Forget," and in 2007 in the play "Shakespeare's Will." Nimoy spent his entire career as a successful and versatile professional.

His father ran a barbershop in Boston, where he specialized in the popular Spock Cut. He married Sandra Zober in 1954, and together they had a son named Adam and a daughter named Julie.

Despite his parents' objections, he began appearing in local theater productions at the age of eight.

He made a cameo appearance in the 2013 film Star Trek Into Darkness and provided the voice of King Kashekim Nedakh in Atlantis: The Lost Empire.

He co-starred alongside William Shatner in the original Star Trek, and in an episode of The Man from U.N.C.L.E. 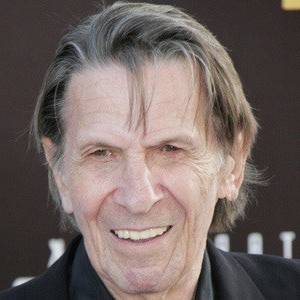