Born on December 5, 1986 (age 35) in Madison, Florida, United States. He is a celebrity American football player. He attended Taylor County High School (2005), University of Oregon, East Mississippi Community College. He weight is 250 lbs. He height is 6′ 0″. His salary is $2.2 Million.

In 2017, he joined the Philadelphia Eagles as a running back and helped them win Super Bowl LII. He formerly played for the Tampa Bay Buccaneers, Pittsburgh Steelers, and New England Patriots, with whom he was a part of the Super Bowl XLIX and LI championship teams.

He was born to Barbara and Gary Blount.

In 2010, he signed with the Tennessee Titans as an undrafted free agent, but he was traded to the Tampa Bay Buccaneers before the start of the NFL season.

He led the NFL in rushing touchdowns with 18 as a member of the New England Patriots in 2016.

Information about His net worth in 2021 is being updated as soon as possible by infofamouspeople.com, You can also click edit to tell us what the Net Worth of the LeGarrette Blount is

He played college football at the University of Oregon under coach Chip Kelly .

LeGarrette Blount's house and car and luxury brand in 2021 is being updated as soon as possible by in4fp.com, You can also click edit to let us know about this information. 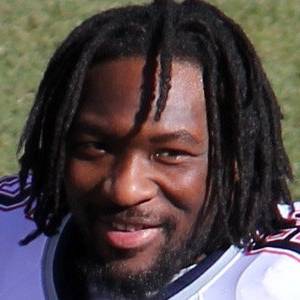