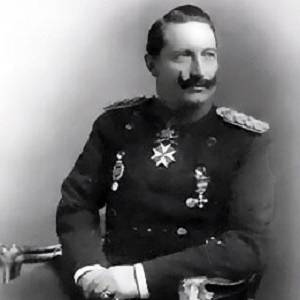 Wilhelm II reigned as King of Prussia and the final German Emperor (Kaiser). World War I erupted as a result of his rash policies. Wilhelm served as Emperor of Germany from 1888 to 1918, until the end of World War I, as the son of the Crown Prince of Prussia and the daughter of Queen Victoria of Great Britain. Wilhelm resisted his parents' attempts to instill liberal values in him as he grew older, eventually becoming a proponent of autocratic power. At the age of 29, Wilhelm acquired the crowns of German emperor (Kaiser) and King of Prussia following the death of his father. Despite his close ties to the British royal family, Wilhelm alienated Britain with his naval expansion and offended several other countries with his exceedingly inappropriate remarks. He encouraged the Austrians to adopt a tough stance against Serbia, promising Austria German assistance in the case of war, without anticipating the chain reaction his actions would cause, which finally led to World War I. Following that, Russia and its allies, France and the United Kingdom, joined the fight against Germany and Austria. Wilhelm abdicated the throne and fled into exile in the Netherlands, where he died after a few years. The German military swiftly disintegrated, and Wilhelm realized he would be arrested very immediately.

The son of Victoria, Princess Royal and Prince Frederick William of Prussia and the grandson of Queen Victoria of England, Wilhelm II fathered six sons and one daughter through his marriage to Augusta Victoria of Schleswig-Holstein. His second marriage, to Hermine Reuss of Greiz, lasted from 1922 until his death in 1941.

Following Emperor Wilhelm I's death in 1888, then-Prince Wilhelm's dying father was briefly Emperor until the prince, at the age of twenty-nine, acquired the title of Wilhelm II.

By most accounts, he was somewhat hot-headed and emotionally unstable. His personality no doubt had a major influence on his less-than-stellar reputation, as well as on the course of European history.