Julianne Alexandra Hough is an American dancer, actress, and singer. In 2007, she joined the cast of ABC's Dancing with the Stars as a professional dancer, winning two seasons with her celebrity partners. After leaving the show in 2009, she returned in 2014 to serve as a permanent judge on Dancing with the Stars, a position she held until 2017. For her work on the series, she has received three nominations for the Primetime Emmy Award for Outstanding Choreography, winning once in 2015 with her brother Derek Hough.Hough made her acting debut in the 2001 film Harry Potter and the Philosopher's Stone, but played her first major role in the 2010 film Burlesque, which was followed by leading roles as Ariel in Footloose, Sherrie in Rock of Ages, and Katie in Safe Haven. In 2016, she played Sandy in the live Fox television production of Grease. She also served as a judge on America's Got Talent for its 14th season. In 2022, she made her Broadway theatre debut in the political farce POTUS: Or, Behind Every Great Dumbass Are Seven Women Trying to Keep Him Alive. That same year she hosted the 75th Tony Awards: Act One alongside Darren Criss which streamed on Paramount+.

Julianne Hough is a well-known American dancer, performer, celebrity judge, and the star of 'Footloose,' one of the finest dance films ever created. Her amazing career as a dancer and choreographer is well-known among her followers. When she was ten years old, the dancer's feet began tapping and her heart began rumbling to music. She has established herself as one of the most popular choreographers in the industry after experiencing highs and lows in her dancing and acting careers. She is also a two-time professional champion of the popular dance reality show 'Dancing with the Stars.' Julianne has won a slew of honors and contests, establishing herself as a household figure. She is most known for being the face of the film "Footloose" and for serving as the fourth permanent judge on "Dancing with the Stars" in 2014. Julianne has gone about sharing her rhythmic and passionate enchantment via dance, defining and re-defining her passion for dance and choreography, inspiring a number of young hearts all over the world. Adrenaline is the reason she does what she does, she adds.

She won the Junior World Latin Championships when she was 15 years old.

She won season 4 of Dancing With the Stars with Apolo Ohno , and received a nomination for the Creative Arts Primetime Emmy for outstanding choreography in 2007.

Julianne Hough's estimated Net Worth, Salary, Income, Cars, Lifestyles & many more details have been updated below. Let's check, How Rich is She in 2021-2022? According to Forbes, Wikipedia, IMDB, and other reputable online sources, Julianne Hough has an estimated net worth of $10 Million at the age of 33 years old in year 2022. She has earned most of her wealth from her thriving career as a Singer, Actor, Dancer, Songwriter from United States. It is possible that She makes money from other undiscovered sources

She starred in the 2013 romance film Safe Haven, which was based on the novel of the same name by Nicholas Sparks .

Julianne Hough's house and car and luxury brand in 2021 is being updated as soon as possible by in4fp.com, You can also click edit to let us know about this information. 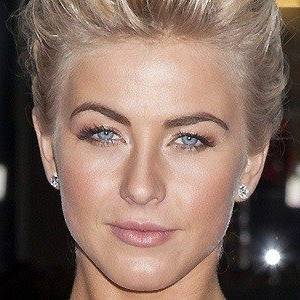