Joshua Winslow Groban (born February 27, 1981) is an American singer, songwriter, musician, record producer, actor and television presenter. His first four solo albums have been certified multi-platinum, and he was charted in 2007 as the number-one best selling artist in the United States, with over 22.3 million records. As of 2012, he had sold over 25 million records worldwide.Groban originally studied acting, but moved to singing as his voice developed. He attended the Los Angeles County High School for the Arts, a free public school on the campus of California State University, Los Angeles, where students receive a conservatory-style education. David Foster called Josh to stand in for an ailing Andrea Bocelli to rehearse a duet, "The Prayer", with Celine Dion at the rehearsal for the 1998 Grammy Awards. Rosie O'Donnell immediately invited him to appear on her talk show. Foster asked him to sing at California Governor Gray Davis' 1999 inauguration. He was cast on Ally McBeal by the show's creator, David E. Kelley, performing "You're Still You" for the 2001 season four finale.After his appearance in two professional productions of the musical Chess, he made his Broadway debut in 2016 as Pierre Bezukhov in Natasha, Pierre & The Great Comet of 1812, to critical acclaim and nomination for a 2017 Tony Award for Best Actor in a Leading Role in a Musical. His performance at the 72nd Tony Awards earned him two Primetime Emmy nominations, one for Outstanding Live Variety Special and one for Original Music and Lyrics for the song "This One's for You". Groban co-starred as Tony Caruso Jr. in the Netflix original series, The Good Cop. Groban was also the host of Rising Star, he also appeared in the films, Coffee Town, Muppets Most Wanted, The Hollars and Crazy, Stupid, Love. He also appeared on TV such as Danny Chase in The Crazy Ones, as well as Walter Bernard Jr. in The Office.

Joshua Winslow Groban, popularly known as Josh Groban, is an American singer, songwriter, and actor with several multi-platinum albums to his credit. Although he is best known for his romantic ballads songs, he also likes to perform opera and classical songs in Italian, Spanish, and French. Groban was inspired by music at an early age, but he did not take it up seriously till he was in the seventh grade and auditioned for a school event. Although his teacher was impressed with his voice and allowed him to perform a solo, he did not become popular with the kids who loved to listen to rap. He initially studied acting and decided to pursue a career in singing only later. Groban, who did not want to limit himself to one particular musical style, came to prominence with his debut album in 2001, and became the best-selling new male artist. In fact, his first four solo albums were super hits, and were certified multi-platinum. In 2007, he was the number one best selling artist in the United States. Besides his singing career, he has appeared in four films and about 22 TV series till date. Also a philanthropist, he is a member of Americans for the Arts Artists Committee, and has set up the Find Your Light Foundation to make young people aware of arts and culture.

He has a younger brother named Chris Groban who was born exactly four years after him. He began dating Kat Dennings in 2014; but they broke up after two years of dating in 2016.

He left Carnegie Mellon University after receiving a singing contract.

He performed on The Oprah Winfrey Show several times.

Josh Groban's estimated Net Worth, Salary, Income, Cars, Lifestyles & many more details have been updated below. Let's check, How Rich is He in 2021-2022? According to Forbes, Wikipedia, IMDB, and other reputable online sources, Josh Groban has an estimated net worth of $35 Million at the age of 41 years old in year 2022. He has earned most of his wealth from his thriving career as a Singer, Singer-songwriter, Actor, Record producer, Musician, Artist, Music artist from United States. It is possible that He makes money from other undiscovered sources

Josh Groban's house and car and luxury brand in 2021 is being updated as soon as possible by in4fp.com, You can also click edit to let us know about this information. 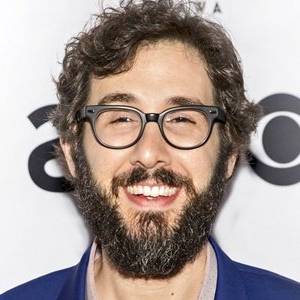