John Sidney McCain III was an American politician, statesman, and United States Navy officer who served as a United States senator representing Arizona from 1987 until his death in 2018. He previously served two terms in the United States House of Representatives and was the Republican nominee for president of the United States in the 2008 election, which he lost to Barack Obama.

Senator John McCain of Arizona was an American politician who served in the United States Senate. In the 2008 presidential elections, he was the Republican Party's presidential nominee. He was born into a military family and attended the United States Naval Academy, eventually becoming a naval aviator. He served in the Vietnam War and was nearly murdered when his jet was shot down and he was taken prisoner while on a bombing mission over Hanoi. John McCain's near-death experience in Vietnam did not stop him from returning to service. He entered politics after retiring from the navy. He was twice elected to the United States House of Representatives and four times to the United States Senate. For openly disagreeing with his party on certain subjects, he has acquired the moniker of "maverick" politician. In the 1990s, he was instrumental in the restoration of diplomatic ties with Vietnam. From 1987 until 2018, he served as a US Senator for Arizona. In 2000, he ran for president against Texas Governor George W. Bush, and in 2008, he ran against Democratic nominee Barack Obama in the US presidential elections, but lost.

He has three daughters named Meghan , Bridget, and Sidney and three sons named Douglas, James and John. He was married to Carol McCain from 1965 to 1980, then he married Cindy McCain later in 1980. His father, John S. McCain, Jr., was a U.S. Navy admiral.

He became a lightweight boxer while in the United States Naval Academy.

In 1999, he published his memoir Faith of My Fathers, which was made into a TV movie.

He ran against President Barack Obama in the 2008 election, but lost by a fairly large margin. 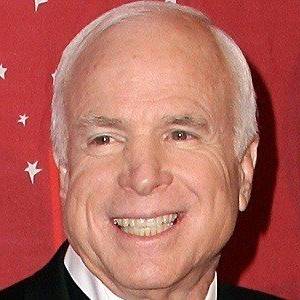