Jerry Lewis was an American comedian, actor, singer, director, producer, writer, and humanitarian. Nicknamed "The King of Comedy", he is regarded as one of the most significant American cultural figures of all time. His contributions to comedy and charity made him a global figure in pop culture over an eight-decade career.

Jerry Lewis is more than simply a hilarious man: he's also an outstanding actor, film producer, and screenwriter. He rose to popularity as one of the immensely successful pair 'Martin and Lewis' during the 1950s. He was introduced to the world of show business at the age of five, as the son of professional entertainers. He had devised his own comic performance, Record Act, an exaggerated mime of popular songs, by the time he was in his teens. He met Dean Martin, a nightclub singer with whom he established Martin and Lewis, a comedic duo. Before moving on to radio, films, and television, the duo performed in nightclubs. The duo rose to fame when they participated in a series of comedy films, known for their slapstick humour and exaggerated physical antics. Despite functioning as a team, each member carved out his own specialty, allowing them to pursue successful solo careers once the trio disbanded. Jerry made his first film without Martin, The Delicate Delinquent, which went on to become a major smash and established him as a single performer. The actor went on to direct and produce films, receiving the Best Director of the Year award in Europe eight times.

His father, Daniel Levitch, was a vaudeville entertainer and his mother, Rachel, was employed as the local radio station's piano player. He was married to Patti Palmer from 1944 to 1980 and then married SanDee Pitnick in 1983. He had seven kids.

His early act was dubbed "Record Act," and it consisted of his miming the words of popular songs as they were being played on a phonograph.

He temporarily used the stage name Joey Lewis, but altered it to avoid confusion between himself and professional boxer Joe Louis and comedian Joe E. Lewis . 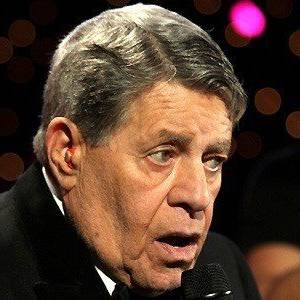