Shawn Corey Carter (born December 4, 1969), known professionally as Jay-Z, is an American rapper, record executive, and media proprietor. He is regarded as one of the most influential hip-hop artists in history. He was the CEO of Def Jam Recordings and he has been central to the creative and commercial success of artists including Kanye West, Rihanna, and J. Cole.Born and raised in New York City, Jay-Z first began his musical career in the late 1980s; he co-founded the record label Roc-A-Fella Records in 1995 and released his debut studio album Reasonable Doubt in 1996. The album was released to widespread critical success, and solidified his standing in the music industry. He went on to release twelve additional albums, including the acclaimed albums The Blueprint (2001), The Black Album (2003), American Gangster (2007), and 4:44 (2017). He also released the full-length collaborative albums Watch the Throne (2011) with Kanye West and Everything Is Love (2018) with his wife Beyoncé, respectively.Through his business ventures Jay-Z has become a billionaire. In 1999, he founded the clothing retailer Rocawear, and in 2003, he founded the luxury sports bar chain 40/40 Club. Both businesses have grown to become multi-million-dollar corporations, and allowed him to start up the entertainment company Roc Nation in 2008. In 2015, he acquired the tech company Aspiro and took charge of their media streaming service Tidal. In 2020, he launched "Monogram", a line of cannabis products.One of the world's best-selling music artists, with over 125 million records sold, Jay-Z has won 24 Grammy Awards, the joint-most Grammy awards of any rapper along with Kanye West. Jay-Z also holds the record for the most number-one albums by a solo artist on the Billboard 200 (14). Additionally, he is a recipient of the NAACP's President's Award, and has been nominated for a Tony Award. Ranked by Billboard and Rolling Stone as one of the 100 Greatest Artists of All Time, Jay-Z was the first rapper honored in the Songwriters Hall of Fame, and the first solo living rapper inducted in the Rock and Roll Hall of Fame. In 2013, Time named him one of the 100 most influential people in the world.

Shawn Corey Carter, better known by his stage name Jay-Z, is an American rapper and entrepreneur who is one of the most well-known figures in the hip-hop genre. He is not only a renowned rapper, but also a successful entrepreneur, as the owner of the Roc Nation entertainment organization. His records have sold more than 50 million copies worldwide, and he has won numerous honors. Many of his CDs have charted on prominent lists, including the well-known Billboard 200. His large catalog of music speaks volumes about his hard-work and ruthless, aspiring quality. He is also a qualified NBA sports representative and owns the 40/40 Club, Def Jam Records, Roc Nation Sports, and Roc-A-Fella. Jay-Z was been named one of the most successful artists of the millennium, among legendary rappers such as 50 Cent, Nelly, and Eminem. The majority of his paintings are fragments of his turbulent, drug-addled upbringing. Despite coming from a humble beginning, Jay-Z is now a multi-millionaire artist who continues to dazzle audiences with his captivating music. Aside from work, he has been exceedingly private about his personal life and has kept his relationship with singer/actress Beyonce Knowles a secret. He is married to her and they have a daughter together.

After getting a boom box from his mother on his 12th birthday, his enthusiasm in making music blossomed, and his moniker changed from "Jazzy" to "Jay-Z."

His success in music led him to launch a record label and a clothing line, become a partial owner of the Brooklyn Nets, and found the 40/40 Club.

Jay-Z's estimated Net Worth, Salary, Income, Cars, Lifestyles & many more details have been updated below. Let's check, How Rich is He in 2021-2022? According to Forbes, Wikipedia, IMDB, and other reputable online sources, Jay-Z has an estimated net worth of $1.3 Billion at the age of 52 years old in year 2022. He has earned most of his wealth from his thriving career as a Singer, Songwriter, Record producer, Entrepreneur, Rapper, Actor, Film Producer, Television producer from United States. It is possible that He makes money from other undiscovered sources

He grew up listening to soul artists such as Marvin Gaye , which influenced his early music.

Jay-Z's house and car and luxury brand in 2021 is being updated as soon as possible by in4fp.com, You can also click edit to let us know about this information. 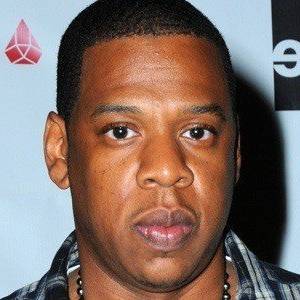