George Michael was an English singer, songwriter and record producer. He is considered one of the most significant cultural figures of the MTV generation and is one of the best-selling music artists of all time, with sales of over 120 million records worldwide. Michael is known as a leading creative force in music production, songwriting, vocal performance, and visual presentation. He achieved seven number-one songs on the UK Singles Chart and eight number-one songs on the US Billboard Hot 100. Michael won various music awards, including two Grammy Awards, three Brit Awards, three American Music Awards, twelve Billboard Music Awards, and four MTV Video Music Awards. In 2015, he was ranked 45th in Billboard's list of the "Greatest Hot 100 Artists of All Time". The Radio Academy named him the most played artist on British radio during the period 1984–2004.Born in East Finchley, North London, Michael rose to fame as a member of the music duo Wham! and later embarked on a solo career. Forming the duo Wham! with Andrew Ridgeley in 1981, the band's first two albums, Fantastic and Make It Big , reached number one on the UK Albums Chart and the US Billboard 200. Their hit singles included "Wake Me Up Before You Go-Go" and "Last Christmas". Establishing themselves as a global act, Wham! toured China in April 1985; the tour was the first visit to China by a Western popular music act, and it generated worldwide media coverage.Michael's first solo single, "Careless Whisper", reached number one in over 20 countries, including the UK and US. Before embarking on the production of his first solo album, Michael went on to release two more number-one singles, "A Different Corner" and the Aretha Franklin duet "I Knew You Were Waiting ". Michael's debut solo album, Faith, was released in 1987, topping the UK Albums Chart and staying at number one on the Billboard 200 for 12 weeks. Globally it sold 25 million copies, and four singles from the album—"Faith", "Father Figure", "One More Try", and "Monkey"—reached number one on the Billboard Hot 100. Michael became the best-selling music artist of 1988, and Faith was awarded Album of the Year at the 1989 Grammy Awards. His second solo album, Listen Without Prejudice Vol. 1 , sold approximately eight million copies and was a UK number-one. It included the Billboard Hot 100 number-one "Praying for Time" and the worldwide hit "Freedom! '90". A 1991 live duet with Elton John, "Don't Let the Sun Go Down on Me", was also a transatlantic

George Michael, born Georgios Kyriacos Panayiotou, was an English singer, songwriter, and record producer. In 1987, he won a Grammy for best album of the year, making him one of the most popular pop singers of the 1980s and 1990s. He rose to prominence as a member of the music duet Wham!, which he created as a youngster and with whom he had his first international success in 1984. He's had a string of successful singles and albums since then. With his debut solo album, Faith, he found popularity as a solo musician as well. As a solo artist, he sold more than 80 million records worldwide, making him one of the best-selling musicians of his time. He acquired an early affinity for music while growing up in and around London. In high school, he and his friend Andrew Ridgeley became friends because of their shared love of pop music. Both dropped out of high school and formed a short-lived band. But they quickly got a record contract and changed their name to Wham! Following multiple hits with Wham!, he left the band to pursue a solo career. He won his first Grammy Award as a solo artist for a duet with Aretha Franklin. He'd had a few run-ins with the law in his personal life. He was a tremendous philanthropist who had given a lot of his time and money to numerous organisations. In 2016, at the age of 53, he died of heart and liver problems.

He dated Anselmo Feleppa in the early 1990s. He then dated Kenny Goss for over ten years before beginning a relationship with Fadi Fawaz .

As a DJ, he would perform in clubs and schools around the country, as well as busking on the London Underground.

His 2014 solo album Symphonica reached #1 on the United Kingdom charts.

He sang a duet with Aretha Franklin on the song "I Knew You Were Waiting" in 1987. 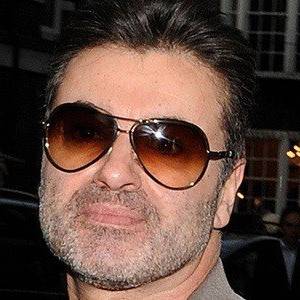