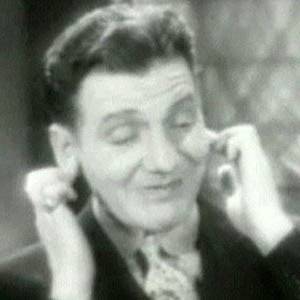 Frank Fay (born Francis Anthony Donner; November 17, 1891 – September 25, 1961) was an American vaudeville comedian (the first stand-up) and film and stage actor. He is considered an important pioneer in stand-up comedy. For a time he was a well known and influential star, but he later fell into obscurity, in part because of his abrasive personality and fascist political views. He played the role of Elwood P. Dowd in the 1944 Broadway play Harvey by the American playwright Mary Coyle Chase. He is best known as actress Barbara Stanwyck's first husband. Their troubled marriage is thought by some to be the basis of the 1937 film A Star Is Born, in which the previously unknown wife shoots to stardom while her husband's career goes into sharp decline. Fay was notorious for his bigotry and alcoholism, and according to the American Vaudeville Museum, "even when sober, he was dismissive and unpleasant, and he was disliked by most of his contemporaries".Although very talented, Fay offended most of the people he worked with because of his enormous ego. Former vaudevillian and radio star Fred Allen remarked, "The last time I saw him he was walking down Lover's Lane, holding his own hand." Actor Robert Wagner wrote that Fay was "one of the most dreadful men in the history of show business. Fay was a drunk, an anti-Semite, and a wife-beater, and Barbara [Stanwyck] had had to endure all of that", while according to actor and comedian Milton Berle "Fay's friends could be counted on the missing arm of a one-armed man." Berle, who was Jewish, claimed to have once hit Fay in the face with a stage brace after Fay, on seeing Berle watching his act from offstage, called out, "Get that little Jew bastard out of the wings".

First spouse of Barbara Stanwyck, who was also a prominent vaudeville performer. His raunchy comedy didn't last long as the Great Depression brought in a conservative movement.

His marriage to Babara Stanwyck became strained when she started gaining popularity.

He was earning almost $17,000 per week as a vaudeville performer.

He has a star on the Hollywood Walk of Fame and he originated the role of "Elwood P. Dowd" in the 1944 Broadway play Harvey by the American playwright Mary Coyle Chase.

His troubled marriage with Barbara Stanwyck might have been the inspiration for the film A Star is Born.