Daniel Webster was an American lawyer and statesman who represented New Hampshire and Massachusetts in the U.S. Congress and served as the U.S. Secretary of State under Presidents William Henry Harrison, John Tyler, and Millard Fillmore. Webster was one of the most prominent American lawyers of the 19th century, and argued over 200 cases before the U.S. Supreme Court between 1814 and his death in 1852. During his life, he was a member of the Federalist Party, the National Republican Party, and the Whig Party.

Political talker who served as the senator and representative for Massachusetts in the House of Representatives. Under three presidents, he served as Secretary of State for the United States.

His father, Ebenzer Webster, served as a judge, militia man, and farmer.

After graduating from Dartmouth College, he worked as a teacher and a lawyer.

He was part of the Great Triumvirate along with Henry Clay and John C. Calhoun.

In 1839, he was offered the position as Vice-President to President William Henry Harrison, but turned it down.

● Daniel Webster was born on January 18, 1782 (age 70) in Salisbury, New Hampshire, United States ● He is a celebrity politician 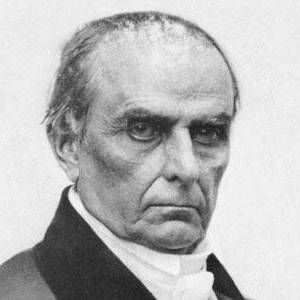