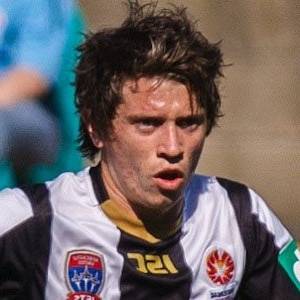 Craig Alexander Goodwin is an Australian international football player who plays for Adelaide United in the A-League, on loan from Al-Wehda of the Saudi Professional League. Goodwin has represented the Australian national team and has also previously appeared for the under-23 national side.

Australian winger who formerly played for the Melbourne Heart and Newcastle Jets before joining Adelaide United in the 2014 A-League season. In 2012, he made his international debut in an Asian Olympic Qualifier match for Australia.

He was born in Adelaide, Australia.

He began his career as an amateur with Munno Para City Football Club before joining the Adelaide Raiders' junior system. In 2009, he made his professional debut.

He was nominated for the NAB Young Footballer Of The Year award in his first year with the Newcastle Jets in 2012.

He has played with goalkeeper Eugene Galekovic at Adelaide United.

Craig Goodwin's house and car and luxury brand in 2021 is being updated as soon as possible by in4fp.com, You can also click edit to let us know about this information.