How old is: 75 years Female

Connie Chung, or Constance Yu-Hwa Chung Povich, is a well-known American journalist of Chinese descent. She has worked as an anchor and reporter for television news networks in the United States, including NBC, CBS, ABC, CNN, and MSNBC. She started a show called "Eye to Eye with Connie Chung," which quickly became a hit across the country. There was a mix of news and celebrity-friendly feature interviews on the show. Despite the popularity of the show, Chung was chastised for focusing on entertainment rather than news. She was the first Asian American woman to lead a major network newscast in the United States of America, and she was just the second woman to co-host CBS Evening News in 1993. She has also done a number of well-known interviews, including one with US Representative Gary Condit following the disappearance of Chandra Levy. She also spoke with Earvin Johnson, a well-known basketball star, when he revealed publicly that he was HIV-positive. After the explosion in Oklahoma City in 1995, she sparked outrage for asking an improper question to a firefighter during an interview. Her inquiry was deemed disrespectful to the circumstances, prompting people to write letters of protest. She was fired as a co-anchor of CBS Evening after a public uproar.

She married talk show host Maury Povich in 1984, converting to Judaism in the process. Together, they adopted a son named Matthew.

She earned a journalism degree from the University of Maryland, College Park, in 1969. In the early 1970s, she worked as a correspondent for CBS Evening News with Walter Cronkite in Washington, D.C.

Information about Her net worth in 2021 is being updated as soon as possible by infofamouspeople.com, You can also click edit to tell us what the Net Worth of the Connie Chung is

She was the first journalist to interview Magic Johnson after he announced that he was HIV positive.

Connie Chung's house and car and luxury brand in 2021 is being updated as soon as possible by in4fp.com, You can also click edit to let us know about this information. 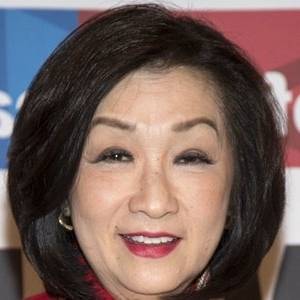