Louis Brian Piccolo was an American professional football player, a halfback for the Chicago Bears of the National Football League for four years. He died at age 26 from embryonal cell carcinoma, an aggressive form of germ cell testicular cancer, first diagnosed after it had spread to his chest cavity.

Brian's Song, a 1971 TV movie about a former NFL running back who died at the age of 26 from embryonal cell cancer, was based on his life.

He was married to Joy Murrath from 1964 to 1970; the couple had three children, Kristi, Lori, and Traci.

After an outstanding season at Wake Forest University, he was voted ACC Player of the Year in 1964.

His #41 jersey was retired by the Chicago Bears after his death.

He was portrayed by Sean Maher in the Hollywood remake of Brian's Song in 2001.

● Brian Piccolo was born on October 31, 1943 (age 26) in Pittsfield, Massachusetts, United States ● He is a celebrity football player 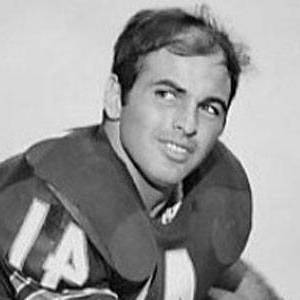