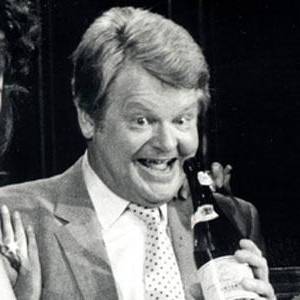 Alfred Hawthorne "Benny" Hill was an English actor, comedian, singer, and writer. He is remembered for his television programme The Benny Hill Show, an amalgam of slapstick, burlesque and double entendre in a format that included live comedy and filmed segments, with Hill at the focus of almost every segment.

Acclaimed British comedian, Benny Hill, best known for his own program, ˜The Benny Hill Show', earned an international cult following for his comedy. The show was immensely popular, running for more than three decades in more than 109 countries across the world. Born into a lower middle class family, Hill did many odd jobs for livelihood, including that of a milkman and a driver, before he got work as a stage manager. All through his teenage years, he had dreamt of making it big in the world of entertainment. In order to fulfil this dream, he came to London at the tender age of 16 to pursue a career in comedy. However, he could not connect with audiences while he was on stage and he wasn't quite successful with his attempt on radio either. It was at television that he found success and fame. He began his career in television with the show, ˜Hi There' and later went on to create the legendary TV comedy, ˜The Benny Hill Show'. He also appeared in a number of films. He never married all through his life.To learn more interesting and intriguing facts about his childhood, personal life and achievements, scroll down and continue to read this biography.

His father and uncle were circus clowns. After his mother passed, he kept her home in the state it had been at the time of her death, as a shrine to her. He died of kidney failure due to his weight.

He worked as a bridge operator, milkman and drummer. He also worked as a radio performer before making his first television appearance in 1950.

He discovered that Charlie Chaplin, his childhood idol, was a fan of his when he was invited to Chaplin's home in Switzerland.

In 1969, he starred in the British caper film The Italian Job with Michael Caine.