Simone Arianne Biles is an American artistic gymnast. Her seven Olympic medals tie Shannon Miller for the most Olympic medals won by an American gymnast. She is considered one of the greatest and most dominant gymnasts of all time.At the 2016 Summer Olympics in Rio de Janeiro, Biles won individual gold medals in the all-around, vault, and floor; bronze on balance beam; and gold as part of the United States team, dubbed the "Final Five". At the 2020 Summer Olympics in Tokyo, she won bronze on balance beam, as well as silver with the United States team, after struggling with "the twisties", a temporary loss of air balance awareness. Her partial withdrawal, focus on safety, mental health, and perseverance were praised. She is also a five-time World all-around champion , five-time World floor exercise champion , three-time World balance beam champion , two-time World vault champion , a seven-time United States national all-around champion , and a member of the gold medal-winning American teams at the 2014, 2015, 2018, and 2019 World Artistic Gymnastics Championships. She is also a three-time World silver medalist and a three-time World bronze medalist .

Simone Biles is an American artistic gymnast who is well-known for her individual gold medal at the 2016 Olympic Games held at Rio de Janeiro. She is an artistic gymnast and typically excels at the all-round, floor, and vault gymnastics. Simone Biles has been a world champion in all the three for several years. She has won around 19 Olympic and World Championship medals in all, making her the most celebrated American gymnast. She has a record for the most gold medals won by an American woman at a single Olympic Games. She is only the 6th woman to win the Olympics medal and the World Championship medal in all round individual title. She is known for her appearance on ˜Dancing with the Stars'. She currently resides in Spring, Texas, USA.

She was raised by her grandparents, Ronald and Nellie Biles, as her mother Shannon Biles struggled with substance abuse. She has three siblings: Ronald, Adam and Adria. She began dating fellow gymnast Stacey Ervin in 2017.

She trained for thirty hours a week while still attending The Redd School. She won her first vault gold medal at the Jr. Visa Championships in 2012.

She won ten gold medals at World Championship events from 2013 to 2015. In 2018, Lifetime made a movie about her titled The Simone Biles Story: Courage To Soar.

Simone Biles's estimated Net Worth, Salary, Income, Cars, Lifestyles & many more details have been updated below. Let's check, How Rich is She in 2021-2022? According to Forbes, Wikipedia, IMDB, and other reputable online sources, Simone Biles has an estimated net worth of $16 Million at the age of 25 years old in year 2022. She has earned most of her wealth from her thriving career as a gymnast from United States. It is possible that She makes money from other undiscovered sources

She won a silver medal at the 2013 American Cup one year before Jordyn Wieber won gold at the same event.

Simone Biles's house and car and luxury brand in 2021 is being updated as soon as possible by in4fp.com, You can also click edit to let us know about this information.

● Simone Biles was born on March 14, 1997 (age 25) in Columbus, Ohio, United States ● She is a celebrity gymnast ● She joined tvshows named Dancing with the Stars (Since 2005) and The Year: 2016 ● The parents of Simone Biles are Nellie Biles, Ronald Biles● Simone Biles has 4 siblings in Her family: Adria Biles, Ron Biles Jr., Adam Biles, Ashley Biles Thomas● Her height is 4ft 8 (142cm)● You can find Her website below: http://www.simonebiles.com/ 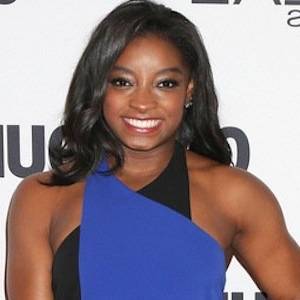