Robert Arthur Kardashian (born March 17, 1987) is an American television personality. He is known for appearing on Keeping Up with the Kardashians, a reality television series that centers on his family, as well as its spin-offs. In 2011, Kardashian also competed in the thirteenth season of ABC's Dancing with the Stars, during which he placed second.

Robert Rob Arthur Kardashian is an American reality television star who is best known for his role on 'Keeping Up with the Kardashians,' a show about his family. The show, which also stars his mother and sisters Kourtney, Khloe, and Kim Kardashian, as well as half-sisters Kylie and Kendall, is one of the most successful reality shows on American television. Rob was an obscure face until the series premiered, but after the series' success, he became a well-known face. The Kardashian sisters became celebrities as a result of the show. Despite his intentions to study law, he did not apply to any law schools after graduation, opting instead to pursue a career as a reality TV personality and businessman. He has also appeared in numerous TV shows, including ABC's 'Dancing with the Stars,' where he came in second place. He also has a number of business enterprises under his belt, including his own designer sock brand, Arthur George.

He has three older sisters named Kourtney , Khloe and Kim Kardashian , and two younger sisters named Kylie and Kendall Jenner . In 2016, he got engaged to Blac Chyna , who gave birth to a daughter named Dream on November 10 of that year. They broke up about a month later.

In 2009, he graduated from the University of Southern California with a bachelor's degree in business administration.

He placed second in the 13th season of Dancing with the Stars, and was given the title of Most Improved.

He was in a relationship with singer Rita Ora in 2012.

Rob Kardashian's house and car and luxury brand in 2021 is being updated as soon as possible by in4fp.com, You can also click edit to let us know about this information. 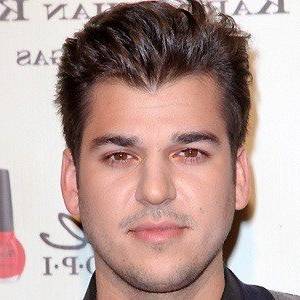