Born on June 25, 1961 (age 60) in Reading, England. He is a celebrity Author, Comedian, Actor, Television Director, Television producer, Screenwriter, Writer, Film director, Film Producer, Disc jockey. He height is 5′ 8″. You can find His website below: http://www.rickygervais.com/.

Original British shows The Office (UK) and Extras co-writer, co-director, and star actor. In 2010, 2011, and 2012, he was the contentious host of the Golden Globe Awards, and in 2012, he began portraying the title role in the TV series Derek. In the Night at the Museum movie, he also plays Dr. McPhee.

He grew up in a family in which everyone was very open and honest with each other. He began a relationship with Jane Fallon in 1982.

Seona Dancing is a New Wave pop duet he co-founded with Bill Macrae.

He won his second Emmy and his seventh BAFTA in 2007 for his role on Extras. His first Emmy Award was for producing the American version of The Office.

Information about His net worth in 2021 is being updated as soon as possible by infofamouspeople.com, You can also click edit to tell us what the Net Worth of the Ricky Gervais is

He once guest starred on the TV series Alias with Jennifer Garner .

Ricky Gervais's house and car and luxury brand in 2021 is being updated as soon as possible by in4fp.com, You can also click edit to let us know about this information. 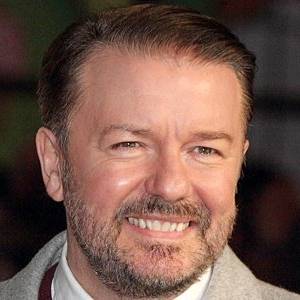