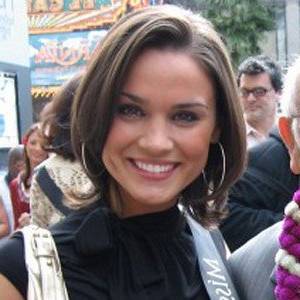 Nicole Brewer is an American news reporter. She is a former Miss Pennsylvania from Philadelphia, Pennsylvania.

This beauty queen was best known as the winner of the 2005 Miss Pennsylvania beauty pageant and a top ten contestant in the 2006 Miss America pageant. She also worked as a television news reporter in Philadelphia.

She worked as a news anchor for her college's radio station while studying speech and communications at Millersville University of Pennsylvania.

She and Philadelphia weather forecaster Carol Erickson appeared in a 2013 viral YouTube video in which they seemed to harshly critique each other while on-air.

She and television actress Jeri Ryan were both finalists in the Miss America pageant (in 2006 and 1990, respectively).

Nicole Brewer's house and car and luxury brand in 2021 is being updated as soon as possible by in4fp.com, You can also click edit to let us know about this information.

● Nicole Brewer was born on April 15, 1983 (age 39) in Pennsylvania, United States ● She is a celebrity pageant contestant ● Her nationality is American● She attended Millersville University● Her spouse is Kellen Economy (m. 2009)