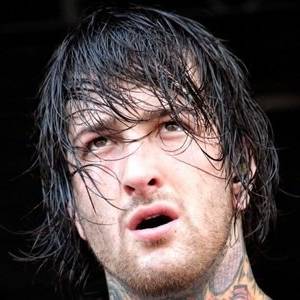 Mitchell Adam Lucker was an American vocalist and songwriter best known as the lead singer for the deathcore band Suicide Silence.

Mitch Lucker was a musician most known for being the main singer of the heavy metal band Suicide Silence. Mitch was well-known for his tattooed physique. He considered tattoos to be works of art. His band made their debut in 2007 with the album "The Cleansing." In its first week, the record sold more than 7,000 copies. Suicide Silence became one of Century Media's best-selling bands. The band released three studio albums in a nine-year period. In 2012, Mitch was killed in a motorbike accident in Huntington Beach, California. At the time of his death, he was only 28 years old.

He had a daughter named Kenadee with his wife Jolie Carmadella .

As a teenager, he performed with his brother's garage band for the first time. In 2002, he formed his own band.

He released three albums with Suicide Silence before passing away in 2012.

He was inspired by the careers of other extreme metal singers like Chris Barnes .