Miles Dewey Davis III was an American trumpeter, bandleader, and composer. He is among the most influential and acclaimed figures in the history of jazz and 20th-century music. Davis adopted a variety of musical directions in a five-decade career that kept him at the forefront of many major stylistic developments in jazz.Born in Alton, Illinois, and raised in East St. Louis, Davis left to study at Juilliard in New York City, before dropping out and making his professional debut as a member of saxophonist Charlie Parker's bebop quintet from 1944 to 1948. Shortly after, he recorded the Birth of the Cool sessions for Capitol Records, which were instrumental to the development of cool jazz. In the early 1950s, Davis recorded some of the earliest hard bop music while on Prestige Records but did so haphazardly due to a heroin addiction. After a widely acclaimed comeback performance at the Newport Jazz Festival, he signed a long-term contract with Columbia Records and recorded the album 'Round About Midnight in 1955. It was his first work with saxophonist John Coltrane and bassist Paul Chambers, key members of the sextet he led into the early 1960s. During this period, he alternated between orchestral jazz collaborations with arranger Gil Evans, such as the Spanish music-influenced Sketches of Spain , and band recordings, such as Milestones and Kind of Blue . The latter recording remains one of the most popular jazz albums of all time, having sold over five million copies in the U.S.

Miles Davis was a jazz trumpeter and composer from the United States. He was regarded as one of the most prestigious musicians of the twentieth century. Throughout his career, he was noted for dabbling with jazz music. Miles was the first musician to combine rock music with conventional jazz, earning him the title of "pioneer of jazz"rock fusion. Despite the fact that his experimental music drew numerous industry critics, his fans outnumbered his detractors. Miles is regarded affectionately by most music fans for his daring innovations. Some argue that Miles Davis' departure from the stage marked the end of jazz's growth. Miles was noted for his unusual personality. He was irritable and had many quarrels with his band members. Miles worked with a lot of renowned people during the course of his five-decade career. He is still revered as a jazz legend and a role model for artists who dare to think and perform in unconventional ways.

He rode horses on his parents' ranch in northern Arkansas. He married his third wife Cicely Tyson on November 26, 1981. He had four children: Cheryl, Miles IV, Gregory and Erin.

He stated that everytime he used vibrato, his instructor Elwood Buchanan whacked him on the knuckles. During his formative years, Clark Terry had a big influence on him.

His most famous musical album was "Kind of Blue," which was released in 1959 by Columbia Records. It was voted in as a national treasure by the House of Representatives in 2009 on its 50th anniversary.

He structured his 1948 band as a nonet with a tuba, thus emulating jazz legend Duke Ellington .

Miles Davis - So What (Trumpet Solo)

Miles Davis - So What (Official Audio)

Miles Davis - So What (Official Video) 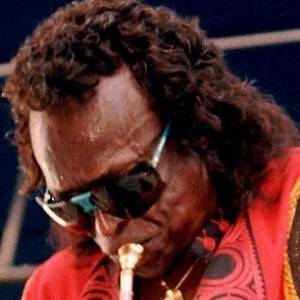