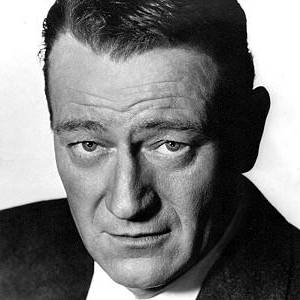 Marion Robert Morrison , known professionally as John Wayne and nicknamed Duke, was an American actor who became a popular icon through his starring roles in films made during Hollywood's Golden Age, especially in Western and war movies. His career flourished from the silent era of the 1920s through the American New Wave, as he appeared in a total of 179 film and television productions. He was among the top box-office draws for three decades, and he appeared with many other important Hollywood stars of his era. In 1999, the American Film Institute selected Wayne as one of the greatest male stars of classic American cinema.Wayne was born in Winterset, Iowa, but grew up in Southern California. He lost a football scholarship to the University of Southern California as a result of a bodysurfing accident, and began working for the Fox Film Corporation. He appeared mostly in small parts, but his first leading role came in Raoul Walsh's Western The Big Trail , an early widescreen film epic that was a box-office failure. He played leading roles in numerous B movies during the 1930s, most of them also Westerns, without becoming a major name. John Ford's Stagecoach made Wayne a mainstream star, and he starred in 142 motion pictures altogether. According to one biographer, "John Wayne personified for millions the nation's frontier heritage."Wayne's other roles in Westerns include a cattleman driving his herd on the Chisholm Trail in Red River , a Civil War veteran whose niece is abducted by a tribe of Comanches in The Searchers , a troubled rancher competing with a lawyer for a woman's hand in The Man Who Shot Liberty Valance , and a cantankerous one-eyed marshal in True Grit , for which he received the Academy Award for Best Actor. He is also remembered for his roles in The Quiet Man with Maureen O'Hara, Rio Bravo with Dean Martin, and The Longest Day . In his final screen performance, he starred as an aging gunfighter battling cancer in The Shootist . He made his last public appearance at the Academy Awards ceremony on April 9, 1979 before succumbing to stomach cancer two months later. He was posthumously awarded the Presidential Medal of Freedom, the highest civilian honor of the United States.

John Wayne was an American actor and director who went on to become one of Hollywood's greatest stars over the course of a long career. Wayne did not set out to be an actor, but a series of events led to him beginning his career as an extra in movies, and from there he rose through the ranks to become one of the industry's greatest stars, specializing in classic Westerns. John Wayne struggled at first because he had to play bit part roles, but that all changed when he appeared in the film 'Stagecoach,' and over the years he appeared in such classic films as John Ford's 'Cavalry Trilogy,' and the 1956 film 'The Searchers,' which is regarded by movie buffs as his best performance. During WWII, John Wayne wore the director's hat and starred in a number of films designed specifically to entertain the troops on the front lines. John Wayne created a body of work that will be cherished by cinema fans for the rest of their lives and loved by people of all ages.

His divorce with actress Esperanza Baur in 1954 resulted in her attempting to shoot him. He was married to Pilar Pallete from 1954 to 1973.

He used to work at a neighborhood ice cream shop when he was younger. After being hurt while bodysurfing, his football scholarship to USC was revoked.

He was born Marion Robert Morrison and never legally changed his name.

He co-starred with Maureen O'Hara in the 1952 romantic comedy The Quiet Man. 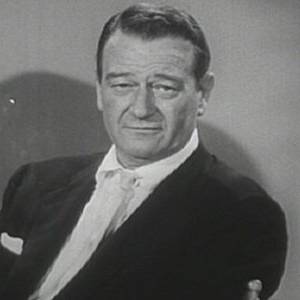