Jared Joseph Leto is an American actor and musician. Known for his method acting in a variety of roles, he has received numerous accolades over a career spanning three decades, including an Academy Award and a Golden Globe Award. Additionally, he is recognised for his musicianship and eccentric stage persona as a member of the rock band Thirty Seconds to Mars.After starting his career on the television series My So-Called Life , Leto made his film debut in How to Make an American Quilt and gained critical attention for his performance in Prefontaine . After supporting roles in The Thin Red Line , Fight Club , Girl, Interrupted and American Psycho , he received widespread praise for his lead role in Requiem for a Dream . He then began focusing increasingly on music, returning to acting with Panic Room , Alexander , Lord of War , Chapter 27 , and Mr. Nobody . His performance in Dallas Buyers Club earned him the Academy Award for Best Supporting Actor. He has since starred in Suicide Squad , Blade Runner 2049 , The Little Things , House of Gucci , and Morbius .

Jared Leto is an actor and musician who received critical acclaim for his performance in the film Requiem for a Dream as heroin addict Harry Goldfarb. Before going on to more major parts, he began his acting career as a cameo in the television sitcom Camp Wilder. An opportunity to play Jordan Catalano in the adolescent drama 'My So-Called Life' provided a significant television break, ensuring that the hitherto unknown actor was discovered. In order to advance his career, he made his Hollywood debut with the film "How to Make an American Quilt." His performance in Prefontaine, on the other hand, gained him critical praise and allowed him to acquire starring parts in the future. He garnered tremendous praise for his portrayal of heroin addict Harry Goldfarb in "Requiem for a Dream," which was one of the most difficult parts he has ever portrayed. He founded the rock band 30 Seconds to Mars with his brother Shannon Leto and other friends to explore his musical side. Progressive metal, alternative rock, hard rock, emo, and synthrock were all used in the band's music. Their songs were full of intellectual and spiritual overtones, similar to Pink Floyd's approach.

He dated actress Cameron Diaz from 1999 to 2003. His brother is drummer and actor Shannon Leto .

Crying Joy, his debut short film, was written and performed when he was a student at the School of Visual Arts in New York City.

Jared Leto's estimated Net Worth, Salary, Income, Cars, Lifestyles & many more details have been updated below. Let's check, How Rich is He in 2021-2022? According to Forbes, Wikipedia, IMDB, and other reputable online sources, Jared Leto has an estimated net worth of $90 Million at the age of 50 years old in year 2022. He has earned most of his wealth from his thriving career as a Actor, Musician, Singer-songwriter, Composer, Film Producer, Photographer, Painter, Businessperson, Film director, Philanthropist from United States. It is possible that He makes money from other undiscovered sources

He starred in Requiem For a Dream with Ellen Burstyn .

Jared Leto's house and car and luxury brand in 2021 is being updated as soon as possible by in4fp.com, You can also click edit to let us know about this information. 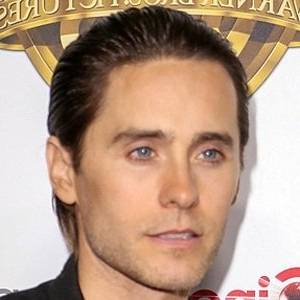