Gordon James Ramsay (; born 8 November 1966) is a British chef, restaurateur, television personality and writer. His restaurant group, Gordon Ramsay Restaurants, was founded in 1997 and has been awarded 16 Michelin stars overall; it currently holds a total of seven. After rising to fame on the British television miniseries Boiling Point in 1999, Ramsay became one of the best-known and most influential chefs in the United Kingdom.Ramsay's television appearances are defined by his bluntness, fiery temper, strict demeanour, and frequent use of profanity. He combines activities in the television, film, hospitality, and food industries, and has promoted and hired various chefs who have apprenticed under his wing. He is known for presenting television programmes about competitive cookery and food, such as the British series Hell's Kitchen , Ramsay's Kitchen Nightmares , and The F Word , with the latter winning the 2005 BAFTA Award for Best Feature, and the American versions of Hell's Kitchen , Kitchen Nightmares , MasterChef , and MasterChef Junior , as well as Hotel Hell , Gordon Behind Bars , Gordon Ramsay's 24 Hours to Hell and Back , and Next Level Chef .

Gordon Ramsay is a Scottish-born British chef who now has 14 Michelin stars for his restaurants. After an accident ended his chances of a bright football career, he returned to college to complete a hotel management course and train with some of the world's top chefs, including Albert Roux and Marco Pierre White in London, and Guy Savoy and Jo«l Robuchon in France. He became the chef at Aubergine in London, which received two Michelin stars in three years. Restaurant Gordon Ramsay, his first totally owned and named restaurant, immediately acquired the most coveted honor in the culinary world: three Michelin stars. Restaurant Gordon Ramsay is now the longest-running three-star restaurant in London, and Ramsay is one of just four chefs in the UK to keep three stars. He has a long list of successful restaurants all around the world. He's also become a TV star in the United Kingdom and throughout the world. He is also the author of several novels, several of which have become international blockbusters.

He married Tana Ramsay in 1996. He has three daughters named Megan , Holly and Matilda and a son named Jack .

He played soccer from the age of 12 until his knee cartilage was destroyed.

He left his commis chef position at Wroxton House Hotel in the 1980s after having an affair with the owner's wife.

Gordon Ramsay's estimated Net Worth, Salary, Income, Cars, Lifestyles & many more details have been updated below. Let's check, How Rich is He in 2021-2022? According to Forbes, Wikipedia, IMDB, and other reputable online sources, Gordon Ramsay has an estimated net worth of $220 Million at the age of 55 years old in year 2022. He has earned most of his wealth from his thriving career as a Presenter, Chef, Restaurateur, TV Personality, Cook, Television producer, Actor, Television Director from Scotland. It is possible that He makes money from other undiscovered sources Reliable sources show that his annual salary is about $60 Million Per Year

He appeared on the TV series The Big Fish Fight with fellow chef Jamie Oliver .

Gordon Ramsay's house and car and luxury brand in 2021 is being updated as soon as possible by in4fp.com, You can also click edit to let us know about this information. 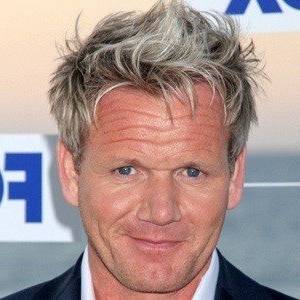