George Timothy Clooney is an American actor and filmmaker. He is the recipient of numerous accolades, including a British Academy Film Award, four Golden Globe Awards, and two Academy Awards, one for his acting and the other as a producer. In 2018, he was the recipient of the AFI Lifetime Achievement Award.Clooney made his acting debut on television in 1978, and later gained wide recognition in his role as Dr. Doug Ross on the NBC medical drama ER from 1994 to 1999, for which he received two Primetime Emmy Award nominations. While working on ER, he began attracting a variety of leading roles in films, with his breakthrough role in From Dusk till Dawn , and the crime comedy Out of Sight , in which he first worked with director Steven Soderbergh, who would become a long-time collaborator. In 1999, he took the lead role in Three Kings, a well-received war satire set during the Gulf War.

George Clooney is an actor, producer, writer, director, and campaigner from the United States. He has gone on to become one of Hollywood's top A-list leading men since his acting debut in 1978. His features and charisma have earned him the title of the last movie star, as he has been crowned The Sexiest Man Alive twice by People magazine. He originally claimed that he would be a perpetual bachelor, but fate had other ideas, and he is now happily married. For his outstanding acting, producing, and directing abilities, he has received countless nominations and awards. Despite his prosperity, he has never forgotten about the world's disadvantaged. He makes frequent use of his celebrity to promote LGBT rights and to assist individuals in political and environmental disasters. Clooney has worked extensively alongside his father to raise international attention to the crisis in Darfur, Sudan, including speaking to the United Nations and the European Union. The Not on Our Watch Project is one of the numerous humanitarian groups with which he collaborates. They seek to raise global awareness about the need to end mass tragedies. He is a true one-of-a-kind and genuine living legend.

He was married to actress Talia Balsam from 1989 to 1993. Then on September 27, 2014, he married British attorney Amal Alamuddin . In 2017, he and Amal welcomed a pair of twins named Ella and Alexander . His aunt, Rosemary Clooney , was a well-known actress and singer.

He was diagnosed with Bell's palsy in middle school, which left him with a partly paralyzed face. He tried out for the MLB's Cincinnati Reds in his late teens but didn't make it beyond the first round of cuts.

He played Batman in the 1997 action film Batman & Robin. His long list of film credits includes O, Brother Where Art Thou, The Perfect Storm, The Descendants, Michael Clayton, Up in the Air, and Tomorrowland.

George Clooney's estimated Net Worth, Salary, Income, Cars, Lifestyles & many more details have been updated below. Let's check, How Rich is He in 2021-2022? According to Forbes, Wikipedia, IMDB, and other reputable online sources, George Clooney has an estimated net worth of $500 Million at the age of 61 years old in year 2022. He has earned most of his wealth from his thriving career as a Actor, Film Producer, Film director, Television producer, Television Director, Voice Actor, Screenwriter from United States. It is possible that He makes money from other undiscovered sources

He co-starred with Brad Pitt in the Ocean's Eleven trilogy.

George Clooney's house and car and luxury brand in 2021 is being updated as soon as possible by in4fp.com, You can also click edit to let us know about this information. 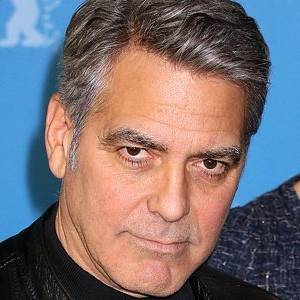