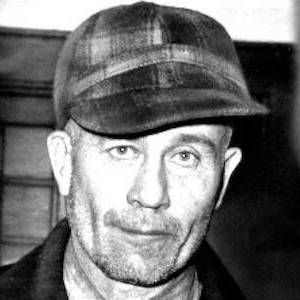 Edward Theodore Gein , also known as the Butcher of Plainfield or the Plainfield Ghoul, was an American killer and body snatcher. Gein's crimes, committed around his hometown of Plainfield, Wisconsin, gathered widespread notoriety in 1957 after authorities discovered he had exhumed corpses from local graveyards and fashioned trophies and keepsakes from their bones and skin. Gein also confessed to killing two women: tavern owner Mary Hogan in 1954 and hardware store owner Bernice Worden in 1957.

Famous Wisconsin killer and necrophile who committed unusual atrocities before being given a life sentence in a mental institution in 1968.

Had an older brother named Henry who died in a fire, along with their father, and it is believed Ed started it.

He was a devout Christian who held a great fear of his domineering mother.

His crimes also included grave robbing and creating a woman suit of stitched together body parts, thus allowing him to feel like his mother.

He was partly the inspiration for the killer Buffalo Bob in the 1991 thriller Silence of the Lambs, directed by Jonathan Demme.