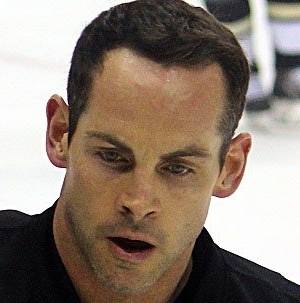 Craig D. Adams (born April 26, 1977) is a Bruneian-born Canadian former professional ice hockey player, who most recently played with the Pittsburgh Penguins of the National Hockey League. Adams was born in Seria, Brunei, but was raised in Calgary, Alberta, residing and playing hockey in the community of Lake Bonavista. Adams won the Stanley Cup with both the Carolina Hurricanes (in 2006) and the Pittsburgh Penguins (in 2009).

Right winger who won Stanley Cups in 2006 and 2009 with the Carolina Hurricanes and the Pittsburgh Penguins, respectively.

He married Anne Adams and he has a son named Rhys and a daughter named Francesca.

He was selected 223rd overall in the 1996 NHL Draft by the Hartford Whales, becoming the last ever pick of the Whalers before the team moved to Carolina and became the Hurricanes.

He was teammates with Rod Brind'Amour on the 2006 Stanley Cup Champion Carolina Hurricanes.

Craig Adams's house and car and luxury brand in 2021 is being updated as soon as possible by in4fp.com, You can also click edit to let us know about this information.