Burton Leon Reynolds Jr. was an American actor, considered a sex symbol and icon of American popular culture.Reynolds first rose to prominence when he starred in television series such as Gunsmoke , Hawk , and Dan August . Although Reynolds had leading roles in such films as Navajo Joe and 100 Rifles , his breakthrough role was as Lewis Medlock in Deliverance . Reynolds played the leading role – often a lovable rogue – in a number of subsequent box office hits, such as White Lightning , The Longest Yard , Smokey and the Bandit , Semi-Tough , The End , Hooper , Starting Over , Smokey and the Bandit II , The Cannonball Run , Sharky's Machine , The Best Little Whorehouse in Texas , and Cannonball Run II , several of which he directed himself, as well as Don Bluth's animated film All Dogs Go to Heaven . He was nominated twice for the Golden Globe Award for Best Actor – Motion Picture Musical or Comedy.

Burton Leon ˜Burt' Reynolds, Jr. was an American actor, director, producer, voice artist, ex-restaurant owner and an ex-sports team owner. He was born and brought up in Michigan and had a police chief officer for a father. He went to the Palm Beach High School and Florida State University where he played college professional football and dreamt of pursuing it further but could not see it through as he suffered from serious injuries twice during his youth. He instead went to the Palm Beach Junior, thinking that he will follow his father's profession. But his acting skills were recognized there and he got a scholarship to work at a theatre in New York. From there onwards he strived and got himself a series of plays, television shows and movies. He was best known for his movies ˜Deliverance', ˜Smokey and the Bandit' and ˜Boggie Nights'. Reynolds was winner of an Emmy Award, Golden Globe Award and was nominated for the Academy Award for his supporting role in ˜Boggie Nights'. His immense talent earned him a star on the Hollywood Walk of Fame. He was linked with many actresses romantically throughout his acting career and was married twice.

His second wife was actress Loni Anderson. He was married to her from 1988 to 1993. He has a son named Quinton.

He earned a football scholarship to Florida State University, where he became roommates with football broadcaster Lee Corso.

In 2012, he guest-starred as himself in an episode of Archer titled "The Man from Jupiter."

He appeared alongside Sally Field in the classic comedy film Smokey and the Bandit. 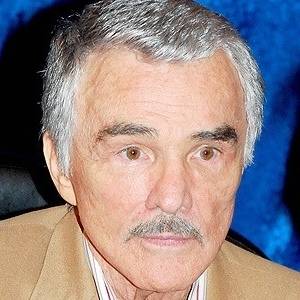