Robert James Fischer was an American chess grandmaster and the eleventh World Chess Champion. A chess prodigy, at age 14 he won the 1958 U.S. Championship. In 1964, he won the same tournament with a perfect score . Qualifying for the 1972 World Championship, Fischer swept matches with Mark Taimanov and Bent Larsen by 6–0 scores. After another qualifying match against Tigran Petrosian, Fischer won the title match against Boris Spassky of the USSR, in Reykjavík, Iceland. Publicized as a Cold War confrontation between the US and USSR, the match attracted more worldwide interest than any chess championship before or since.

A chess prodigy, Bobby Fischer went on to become the greatest chess player of all time, bagging the World Championship title along with several others. What made Fischer a stark superior from his fellow contestants and arch rivals was his immaculate playing skills. His innovative combination of moves made him a star in his own right. At the age of 13, he bagged his first world title by becoming the winner of the US Junior Championship. He went on to become the youngest grandmaster and the youngest ever candidate for the World Championship. In July 1971, he became the first official World Chess Federation (FIDE) number-one-ranked player. He remained at number one position for a total of 54 months. Going on a self-proclaimed exile, he returned to playing chess against Boris Spassky for an unofficial match in 1992. Though he won the same, he spent the rest on his life in exile evading an arrest warrant by the US. Towards the end of his career, he patented a modified chess timing system - Fischer clock and a new variant of chess called Fischerandom (Chess960).

He became engaged to fellow chess grandmaster Miyoko Watai in August of 2004. They married that same year and remained married until his death.

He first learned to play chess using the manual from a chess set purchased in the candy store downstairs from where he grew up.

He won the 1963-64 U.S. Championship with the only perfect score in the history of the tournament and his 1969 book, My 60 Memorable Games, is a must-read for any aspiring chess player.

After his mysterious disappearance, a 1993 film entitled Searching Bobby Fischer, about a prodigy chess player trained to play aggressively like Fischer, was released. The film was written and directed by Steven Zaillian. 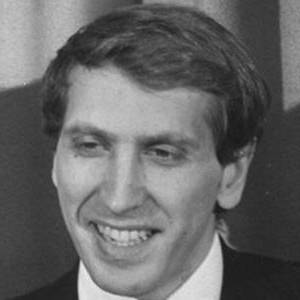