Robert Nesta Marley was a Jamaican singer, musician, and songwriter. Considered one of the pioneers of reggae, his musical career was marked by fusing elements of reggae, ska, and rocksteady, as well as his distinctive vocal and songwriting style. Marley's contributions to music increased the visibility of Jamaican music worldwide, and made him a global figure in popular culture to this day. Over the course of his career, Marley became known as a Rastafari icon, and he infused his music with a sense of spirituality. He is also considered a global symbol of Jamaican music and culture and identity, and was controversial in his outspoken support for democratic social reforms. In 1976, Marley survived an assassination attempt in his home, which was thought to be politically motivated. He also supported legalization of marijuana, and advocated for Pan-Africanism.Born in Nine Mile, Jamaica, Marley began his professional musical career in 1963, after forming the Teenagers with Peter Tosh and Bunny Wailer, which after several name changes would become the Wailers. The group released its debut studio album The Wailing Wailers in 1965, which contained the single "One Love", a reworking of "People Get Ready"; the song was popular worldwide, and established the group as a rising figure in reggae. The Wailers released a further eleven studio albums, and after signing to Island Records the band's name became Bob Marley and the Wailers. While initially employing louder instrumentation and singing, the group began engaging in rhythmic-based song construction in the late 1960s and early 1970s, which coincided with Marley's conversion to Rastafari. Around this time, Marley relocated to London, and the group embodied their musical shift with the release of the album The Best of The Wailers .The group started to gain international attention after signing to Island, and touring in support of the albums Catch a Fire and Burnin' . Following the disbandment of the Wailers a year later, Marley carried on under the band's name. The album Natty Dread received positive reception. In 1975, following the global popularity of Eric Clapton's version of Marley's "I Shot the Sheriff", Marley had his international breakthrough with his first hit outside Jamaica, with a live version of "No Woman, No Cry", from the Live! album. This was followed by his breakthrough album in the United States, Rastaman Vibration , which reached the Top 50 of the Billboard Soul Charts. A few months after the

Bob Marley's name resounds in the minds of many, every time the word "reggae" is mentioned. This famous singer is known for his touching performances, starting initially as a part of the band 'The Wailers'. The band, consisting of famous artistes, Bunny Wailer, Peter Tosh, and Junior Braithwaite, amongst others, produced some of the finest albums of their times. They are still known for hits like 'Simmer Down', 'Rude Boy', as well as cult albums like 'Catch a Fire', and 'Soul Revolution'. Once the band members separated and went their own ways, the famous singer found new artistes to collaborate with and continued releasing his albums as 'Bob Marley and The Wailers'. His first album, under this name, was 'Live!' after which he went on to produce records like 'Rastaman Vibration', 'Kaya', 'Exodus', and 'Babylon by Bus'. His album, 'Rastaman Vibration' was a record-breaking one, sealing his reputation as a peace-loving humanitarian. This singer was known for his staunch faith in the 'Rastafari Movement', which was reflected in the tracks he produced. After his death, caused by malignant melanoma, this distinguished personality has been showered with several prestigious honours, including the 'Grammy Lifetime Achievement Award'. Go on and explore more about his life and works.

He got married to Rita Marley on February 10, 1966 and they had five children together. He had a total of eleven children across all of his relationships.

Although of mixed race, he identified as black and was a big supporter of the Back to Africa movement and the Rastafari movement. He put up posters of the Black Panthers and Che Guevara in the Wailers Soul Shack record store.

His hits "No Woman, No Cry," "Could You Be Loved," "Get Up, Stand Up," and "Redemption Song" preceded his tragic death. He was buried with a soccer ball, a Gibson guitar, a Bible, and a bud of marijuana. He was inducted into the Rock and Roll Hall of Fame in 1994.

He, Peter Tosh, and Bunny Wailer formed The Wailers (later Bob Marley and the Wailers) in 1963. 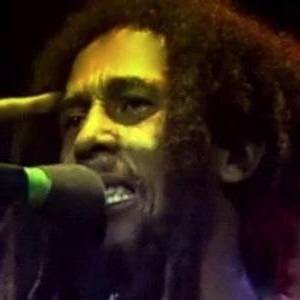