Some fact of Bob Douglas

Bob Douglas was born on November 4, 1884 (age 94) in Saint Kitts And Nevis. He is a celebrity basketball player.

Founder, owner and coach of the New York Renaissance who led the team to dominance in the 20's, 30's and 40's. He is often referred to as "The Father of Black Basketball" and became the first black person to be enshrined in the Naismith Basketball Hall of Fame.

He married Cora Dismond and had no children.

He originally organized two Harlem-based amateur teams, the Spartan Braves and the Spartan Hornets, in before founding the Renaissance in 1923.

As the head coach of the Renaissance, he posted a career winning percentage of .859 and won 88 consecutive games during the 1932-33 season.

Information about Bob Douglas’s net worth in 2021 is being updated as soon as possible by infofamouspeople.com, You can also click edit to tell us what the Net Worth of the Bob Douglas is

He coached John Isaacs , who was announced as a fellow inductee into the Naismith Basketball Hall of Fame in 2015.

● Bob Douglas was born on November 4, 1884 (age 94) in Saint Kitts And Nevis ● He is a celebrity basketball player 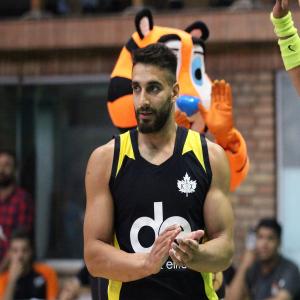