William Michael Albert Broad , known professionally as Billy Idol, is an English singer and songwriter. He first achieved fame in the 1970s emerging from the London punk rock scene as the lead singer of the group Generation X. Subsequently, he embarked on a solo career which led to international recognition and made Idol a lead artist during the MTV-driven "Second British Invasion" in the United States. The name "Billy Idol" was inspired by a schoolteacher's description of him as "idle".Idol began his music career in late 1976 as a guitarist in the punk rock band Chelsea. However, he soon left the group. With his former bandmate Tony James, Idol formed Generation X. With Idol as lead singer, the band achieved success in the United Kingdom and released three albums on Chrysalis Records, then disbanded. In 1981, Idol moved to New York City to pursue his solo career in collaboration with guitarist Steve Stevens. His debut studio album, Billy Idol , was a commercial success. With music videos for singles "Dancing with Myself" and "White Wedding" Idol soon became a staple of then newly-established MTV.

Billy Idol is a punk rock musician who rose to fame as a member of the band Generation X. Born as William Michael Albert Broad, he adopted the name Billy Idol when he embarked on a musical career. He was a bright teenager though he was not really academically inclined. His teacher had once called him idle and as a joke, he started calling himself Idol! His parents wanted him to go to college and he enrolled at the Sussex University to pursue a degree in English. However he found studies to be extremely boring and dropped out within a year to join the Bromley Contingent of Sex Pistols fans. At the initial stages of his musical career he played the guitar for the band Chelsea. Along with a band mate Tony James he co-founded Generation X and he made a switch from being the guitarist to become the lead singer. The team went on to release three successful albums and was one of the first punk bands to be featured on the BBC Television music programme ˜Top of the Pops'. He built up a bad boy image which was well loved by the fans of rock music when he embarked on a solo career post the disbanding of Generation X.

He lived with Perri Lister and had a relationship with her in the 1980s. They had a son, Willem Wolf Broad, on June 15, 1988. He also had a daughter named Bonnie with Linda Mathis in 1989.

He was part of the Bromley Contingent, a group of followers and fans of the punk band the Sex Pistols.

He first became known after performing with the band Generation X.

Billy Idol's estimated Net Worth, Salary, Income, Cars, Lifestyles & many more details have been updated below. Let's check, How Rich is He in 2021-2022? According to Forbes, Wikipedia, IMDB, and other reputable online sources, Billy Idol has an estimated net worth of $60 Million at the age of 66 years old in year 2022. He has earned most of his wealth from his thriving career as a Singer, Musician, Actor, Songwriter from England. It is possible that He makes money from other undiscovered sources

He collaborated with Siouxsie Sioux during 1976 in the band that was to become Siouxsie and the Banshees.

Billy Idol's house and car and luxury brand in 2021 is being updated as soon as possible by in4fp.com, You can also click edit to let us know about this information.

The Life and Tragic Ending of Billy Idol

Billy Idol - Shock To The System 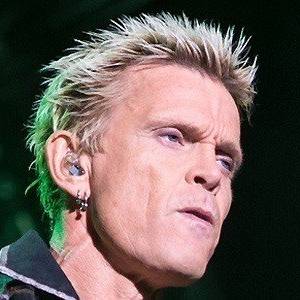