Arnold Daniel Palmer was an American professional golfer who is widely regarded as one of the greatest and most charismatic players in the sport's history. Dating back to 1955, he won numerous events on both the PGA Tour and the circuit now known as PGA Tour Champions. Nicknamed The King, Palmer was one of golf's most popular stars and seen as a trailblazer, the first superstar of the sport's television age, which began in the 1950s.

Arnold Palmer turned the status of the game of golf from being a mere game to a compelling sports activity. Fondly nicknamed The King, he was associated with the tremendous golf boom that the sporting activity witnessed in the latter half of the twentieth century that none ever anticipated. One of the greatest players in the history of men's professional golf, he, with his charismatic looks, not just made the game popular but successfully broke the jinx of golf as being the pastime of the elite and upper class only. He widened the accessibility of the game to the middle and working class, thus establishing a new found reputation to golf. A trailblazer of the golfing world, he, in his lifetime won 92 tournaments and became the highest earner of the sport. What's more, even after ceasing to win tournaments, he remained as one of the highest earners in golf due to his appeal to sponsors and the public. It was due to his sheer sportsmanship and excellence at playing the games that he became the first golfer ever to be bestowed with the prestigious Presidential Medal of Honor. Even after retirement, Palmer contributed to the sports in a big way by turning into an acute businessman and golf course designer.

He was married to Winifred Walzer for 45 years. Following his wife's death, he married Kathleen Gawthrop. He had two daughters named Peggy and Amy. His grandson, Sam Saunders, became a professional golfer.

He went to Wake Forest University for golf but dropped out after the death of a friend.

He gained a reputation for drinking a mixture of iced tea and lemonade and years later, the combination was turned into a mass-produced beverage sold under his name.

He was a part of the Big Three in golf with the great Jack Nicklaus. 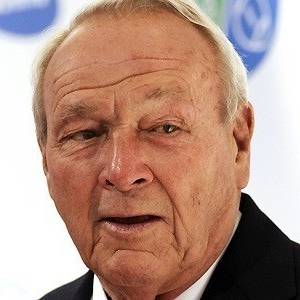