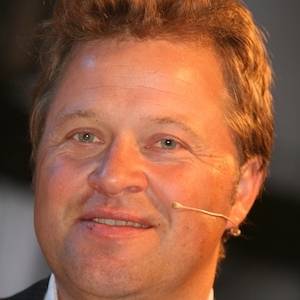 Known for his tenure on Gutta p tur, he is an award-winning Norwegian TV personality. He's written several works, the most well-known of which are Den sumaren eg fylte diesel and Ivar Nimme. He was also the CEO of Creuna at one point.

He married fellow TV host Catherine Gehrkin, with whom he has three daughters.

He went to business school but dropped out before finishing. He worked for the Norwegian Savings Banks Association after completing his necessary military service. In 1990, he made his television debut on the show Hostell.

In 2010, he became a board member of the Conservative Party, a position which harkened back to his days chairing the Young Conservatives.

Arne Hjeltnes's house and car and luxury brand in 2021 is being updated as soon as possible by in4fp.com, You can also click edit to let us know about this information.