Manuel Antonio Rodolfo Quinn Oaxaca (April 21, 1915 – June 3, 2001), known professionally as Anthony Quinn, was a Mexican-American actor. He was known for his portrayal of earthy, passionate characters "marked by a brutal and elemental virility" in numerous critically acclaimed films both in Hollywood and abroad. His notable films include La Strada, The Guns of Navarone, Guns for San Sebastian, Lawrence of Arabia, The Shoes of the Fisherman, The Message, Lion of the Desert, and A Walk in the Clouds. He also had an Oscar-nominated titular role in Zorba the Greek.Quinn won the Academy Award for Best Supporting Actor twice: for Viva Zapata! in 1952 and Lust for Life in 1956. In addition, he received two Academy Award nominations in the Best Leading Actor category, along with five Golden Globe nominations and two BAFTA Award nominations. In 1987, he was presented with the Golden Globe Cecil B. DeMille Lifetime Achievement Award. Through both his artistic endeavours and civil rights activism, he remains a seminal figure of Latin-American representation in the media of the United States.

Anthony Quinn was a Mexican-born American actor who won the Academy Award for Best Supporting Actor twice: for ˜Viva Zapata!' and ˜Lust for Life.' A renowned character actor during the 1950s and 1960s, he appeared in a number of critically acclaimed and commercially successful films, often sharing the screen space with other prominent actors of the Hollywood Golden Age. Born in Mexico to a half-Irish father and a Mexican mother during the Mexican Revolution, he moved to the United States with his family when he was a young child. His family, which struggled financially in the new country, was dealt with a severe blow when his father died in an accident. Aged just nine at that time, Quinn was forced to do odd jobs to help his mother run the family. Always interested in acting, he received training in an acting school before beginning his acting career on stage. His success on the stage paved the way for a Hollywood career. During his initial years he was cast in a series of B-movies though it did not take him long to be considered an A-Lister. With his rugged good looks and powerful performances, he soon came to be regarded as one of the topmost Hollywood stars of the 1950s and 1960s.

His first wife was Cecil B. DeMille's adopted daughter.

In his youth, he worked as a professional boxer and studied art and architecture with Frank Lloyd Wright.

He starred in the 1954 Federico Fellini film La Strada.

He played a supporting role in the 1956 film Lust for Life, in which Kirk Douglas portrays Dutch painter Vincent van Gogh. 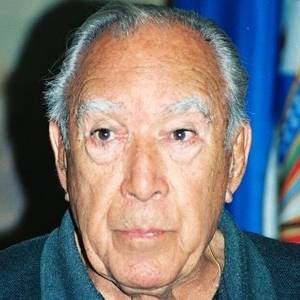