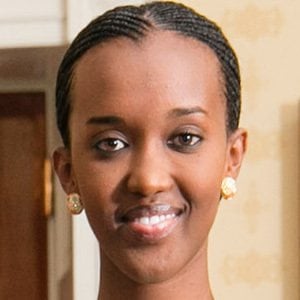 Some fact of Ange Kagame

Celebrity family member and activist who is recognized for being the daughter of Rwandan president Paul Kagame. She has been involved with causes that range from women's empowerment to mass vaccination campaigns.

She obtained a master's degree in international affairs from Columbia University.

She was a supporter of the Boston Celtics professional basketball franchise.

She was born to Jeannette Nyiramongi and Paul Kagame.

In 2014, she was invited to a White House dinner hosted by Barack Obama.