Allen Ezail Iverson (; born June 7, 1975) is an American former professional basketball player. Nicknamed "the Answer" and "AI", he played 14 seasons in the National Basketball Association (NBA) at both the shooting guard and point guard positions. Iverson won NBA Rookie of the Year Award in 1997 and was an 11-time NBA All-Star, won the All-Star game MVP award in 2001 and 2005, and was the NBA's Most Valuable Player (MVP) in 2001. He was inducted into the Naismith Memorial Basketball Hall of Fame in 2016. In October 2021, he was named to the NBA 75th Anniversary Team. Iverson is often regarded as one of the greatest scorers and one of the most influential players in NBA history.Iverson attended Bethel High School in Hampton, Virginia, and was a dual-sport athlete. He earned the Associated Press High School Player of the Year award in both football and basketball, and won the Division 5 AAA Virginia state championship in both sports. After high school, Iverson played college basketball with the Georgetown Hoyas for two years, where he set the school record for career scoring average (23.0 points per game) and won Big East Defensive Player of the Year awards both years.Following two successful years at Georgetown University, Iverson declared eligibility for the 1996 NBA draft, and was selected by the Philadelphia 76ers with the first overall pick. He was named the NBA Rookie of the Year in the 1996–97 season. A four time scoring champion, winning the NBA scoring title during the 1998–99, 2000–01, 2001–02, and 2004–05 seasons, Iverson was one of the most prolific scorers in NBA history, despite his relatively small stature (listed at 6 feet, 0 inches, or 183 centimeters). His regular season career scoring average of 26.7 points per game ranks seventh all-time, and his playoff career scoring average of 29.7 points per game is second only to Michael Jordan. Iverson was also the NBA Most Valuable Player of the 2000–01 season, and led his team to the 2001 NBA Finals the same season. Iverson represented the United States at the 2004 Summer Olympics, winning the bronze medal.Later in his career, Iverson played for the Denver Nuggets, Detroit Pistons, and the Memphis Grizzlies, before ending his NBA career with the 76ers during the 2009–10 season. He was rated the fifth-greatest NBA shooting guard of all time by ESPN in 2008. He finished his career in Turkey with Beşiktaş in 2011. He returned as a player-coach for 3's Company in the inaugural season of the BIG3.

Also known by the nickname, ˜A.I and ˜The Answer', Allen Iverson has been rated by ESPN as ˜the fifth greatest NBA shooting guard of all time'. His life was one of struggle; raised by a single mother he faced poverty all through his childhood. In school, he excelled in sports, played basketball and football and won the Division AAA Virginia state championship in both. Encouraged by his mother to play basketball, Iverson won a scholarship to the Georgetown University, where he excelled in basketball and won numerous awards and anecdotes. After attaining success at university level, he was selected by the Philadelphia 76ers for the NBA draft. He played for the Philadelphia 76ers for a decade, after which he played for the Denver Nuggets, Detroit Pistons and BeÅŸiktaÅŸ. He also represented the United States of America in the Summer Olympics and the World University Games. Despite earning tremendous fame and recognition, Iverson did not let any of it get into his head and is known among his friends and colleagues as an incredibly humble person, devoted to family. He was caught into controversy after got involved in a fight at the Circle Lanes bowling alley in Hampton, Virginia, after which he was arrested.

He was raised by his single mother, Ann Iverson and he had five children with Tawanna Turner before they divorced in 2013.

He played quarterback for his Bethel High School football team, leading the team to a Virginia state championship.

He was a 4-time NBA scoring champion and ESPN named him the fifth greatest NBA shooting guard of all time in 2008.

Allen Iverson's estimated Net Worth, Salary, Income, Cars, Lifestyles & many more details have been updated below. Let's check, How Rich is He in 2021-2022? According to Forbes, Wikipedia, IMDB, and other reputable online sources, Allen Iverson has an estimated net worth of $1 Million at the age of 47 years old in year 2022. He has earned most of his wealth from his thriving career as a Basketball player, Rapper, Athlete from United States. It is possible that He makes money from other undiscovered sources

Early in his career, he pulled a famous crossover dribble on Michael Jordan in front of the home crowd in Philly.

Allen Iverson's house and car and luxury brand in 2021 is being updated as soon as possible by in4fp.com, You can also click edit to let us know about this information. 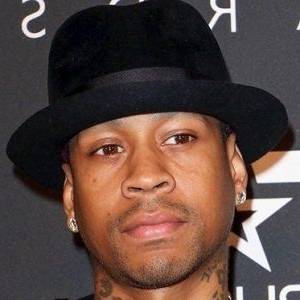