Whitney Elizabeth Houston was an American singer and actress. Nicknamed "The Voice", she is one of the best-selling recording artists of all time, with sales of over 200 million records worldwide. Houston has influenced many singers in popular music, and is known for her powerful, soulful vocals and vocal improvisation skills. She is the only artist to have had seven consecutive number-one singles on the Billboard Hot 100, from "Saving All My Love for You" in 1985 to "Where Do Broken Hearts Go" in 1988. Houston enhanced her popularity upon entering the movie industry. Her recordings and films, have generated both great success and controversy. She has received numerous accolades throughout her career and posthumously, including two Emmy Awards, six Grammy Awards, 16 Billboard Music Awards, and 28 Guinness World Records, as well as induction into the Grammy, Rhythm and Blues Music, and Rock and Roll halls of fame.

The American singer, actress, model, and producer, Whitney Houston is one of the world's most successful female entertainers of all time. Having been exposed to a family with a musical background, the naturally talented beauty became inspired to sing and play the piano at an early age. She entered the entertainment industry by touring nightclubs with her mother, while singing and modeling, until eventually signing her own recording contract and coming out with her debut album. This musical introduction would not only become her best-selling studio album to-date, but would earn her a Grammy, thrusting her into super-pop-stardom, followed by a string of Hollywood film features and production efforts. Throughout her career, she released seven studio albums and three movie soundtrack albums, winning her various awards. Her powerful voice, spirit, and beauty redefined the image of a soul artist. As much as the renowned singer was an international icon and inspiration to females, emerging recording artists, and the community, she also faced some personal challenges that would impair her influential status. From drug addictions to a troubled relationship with husband Bobby Brown, Houston's reputation was painted with a series of eventful ups and downs before she ultimately succumbed to her tragic death

She grew up in a musical family with cousin Dionne Warwick and her godmother Aretha Franklin.

She created the soundtrack for and starred in the film The Bodyguard alongside Kevin Costner.

She sang a duet with Mariah Carey on the song "When You Believe" in 1998. 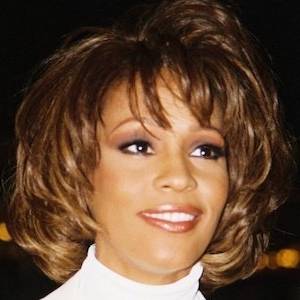