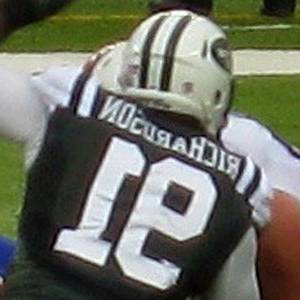 Sheldon Adam Richardson (born November 29, 1990) is an American football defensive tackle who is a free agent. He played college football at Missouri, and was drafted by the New York Jets in the first round of the 2013 NFL Draft. Richardson has also played for the Seattle Seahawks, Cleveland Browns and Minnesota Vikings twice.

Defensive end who made his NFL debut in 2013 for the New York Jets.

His parents are Michael and Zelda Richardson.

He played college football at the University of Missouri, and was selected 13th overall in the 2013 NFL draft.

In 2013 he was the NFL's Defensive Rookie of the Year.

He began his career playing for Jets coach Rex Ryan.

Sheldon Richardson's house and car and luxury brand in 2021 is being updated as soon as possible by in4fp.com, You can also click edit to let us know about this information.

● Sheldon Richardson was born on November 29, 1990 (age 31) in St. Louis, Missouri, United States ● He is a celebrity football player